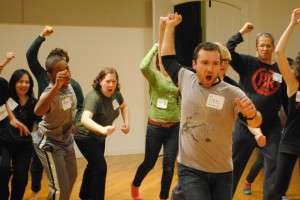 On their website, Team Sunshine Performance Corporation calls themselves “an unstoppable force for good.”

Among other things, they love play fighting and projects that sound insane. In that vein is their current collaboration with Shakespeare in Clark Park, HENRY IV: YOUR PRINCE AND MINE. It will be an over an hour and a half long smashup of two Shakespearean histories featuring 100 non-professional performers creating an epic battle scene.

“Shakespeare in Clark Park,” says Alex Torra, Sunshine’s resident Shakespeare nerd and director of Henry IV, “has become this center-point of the summer, this moment when people come together from all over the city and sit in a park for an evening and watch a play and eat food and lie on blankets.

“The Team Sunshine component to the project is that we kind of pursue the thing that would be most awesome . . . and most fun, and most interesting.” 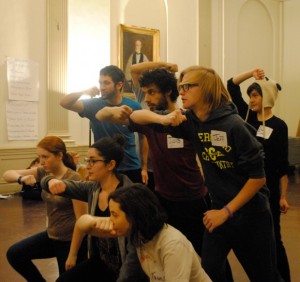 Alex describes long, dreamy conversations of massive war plays in the big bowl at Clark Park, particularly one image of line after line of soldiers pouring over the top of the hill to fill the bowl and charge the audience.

“Of course, it’s that dreaming that artists do and can never figure out how to do it, ‘cause it’s just too impossible,” he adds.

But then the Knight Arts Foundation instituted the Knight Arts Challenge to fund projects specifically benefiting the community. Suddenly, the concept of a massive, Shakespearean battle scene populated by one hundred neighborhood non-actors was doable. After three intensive rounds of proposals, Knight decided to fund the project.

Their next step was to experiment. In December, Team Sunshine recruitment manager Liz Green invited me to participate in a series of workshops as a “non-professional performer.” The December workshops featured mostly experienced and working actors and dancers, with five or six of us “non-professionals” thrown in as a first hack at working with untrained performers.

“One of the things that we always do in making original work,” says Torra, “is this thing of like, wouldn’t it be cool if. Or this would be so much fun. Or it would be incredible if they all did this thing. And we play that game.” 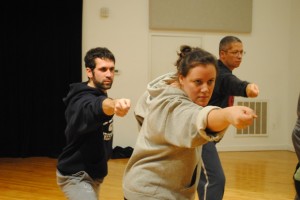 Sunshine started with a basic structure and a jumble of aspirations—a bunch of “wouldn’t it be cool ifs.” It was our job to propose ideas of how those cool ifs might happen, and to model what they’d look like with a large number of people.

Over the course of two weeks, they assembled a sort of “script” for the battle, a choreography for the army’s movements, forms, and gestures. Then over another two weeks in January, thirty of us (this time mostly non-performers ranging from government employees to museum curators to stay-at-home-parents and high schoolers), overseen by army general Ben Camp and his “lieutenants,” were taught those movements. This time our job was to, in six short rehearsals, learn the thirty minute battle sequence and reproduce it in toto.

We were successful, in a messy kind of way, and Sunshine got a concept of both the gritty details and the sensational largeness of the piece.

Actual army members will have five casual weeks of rehearsal throughout June and July, two nights per week. Then there will be “hell week,” with rehearsals nightly, and then actual performances for another week at the end of July.

Ben, the general, relates it to a kind of all-ages summer camp. “My job,” he says, “is to really have things planned in advance, so that it can be clear and fun and not take a huge amount of time, but still feel like committing to something that’s challenging.”

Non-professional performers will be divided into groups of ten or twelve under the specific direction of one “lieutenant.” This will help keep order and foster cohesiveness.

The experience of being in the army, Ben says, “is about doing something that’s challenging but not too challenging, being a part of something that feels bigger than any of us, and a way to make really great new friends.” It should also be a bit of a workout, he adds, so participants can cut out their gym visits for a month or so. 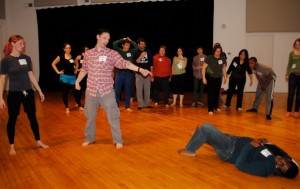 But this still leaves the question: how does a great big battle scene, per the Knight Foundation’s grant stipulation, benefit Philadelphia?

Well, that goes back to Team Sunshine’s mission statement, the concept that creating outrageous, community-involvement art provides a benefit. What they’re offering is a radical opportunity for non-performers to get a window into the theater-making process and to get involved in an innovative, maybe more enriching way, beyond sitting, watching, or donating money.

“Shakespeare in Clark Park gets a thousand audience members each night,” Ben adds. “So it’s a huge thing. It’s kind of a West Philly staple, and a staple of the arts scene in Philadelphia.”