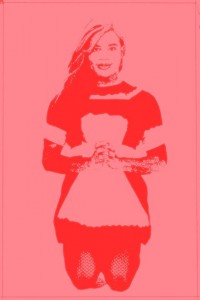 Trained in acting and singing at Rutgers, Sean Cummings spent a few years on the city acting scene, gracing the boards with some stand-out performances for local indies: Quince Production’s Laramie Project: Ten Years Later, Hella Fresh Theater’s Queen of All Weapons, and SmokeyScout Productions’ Return of Confessions of a Plate and Shoe, among others. On off nights, the performer was holed up in his room, creating Beyonce-inspired dance music and trying on Beyonce-inspired outfits as his theatrical persona, Sebastian.

Beginning with a performance in 2012’s inaugural edition of Brat. Shit. Crazy by BRAT Productions, Sebastian has brought his skills and interests together. His dance-music-theater creations draw from each art without being confined to easy definitions. This Saturday’s Sorry, I’m Just Human marks a culmination of two years of choreographic, musical, and theatrical experimentation.

Sebastian calls Sorry, I’m Just Human “queer performance art that uses original, bass driven, sex inspiring music and unapologetically ferocious dance to discuss our world today.” To prepare for the piece, he surveyed friends and strangers about race and sexuality. The soundtrack will include answers to the survey, as well as stories by the dancers themselves.

“This event means a lot to me,” says Sebastian. “Its about uniting us as a people and stepping away from the computer or phone to sit with other people and think, see our world discussed, and maybe have something to say about it.” [Black Box at Underground Arts, 1200 Callowhill Street] February 22, 2014, brownpapertickets.com/event/556280.