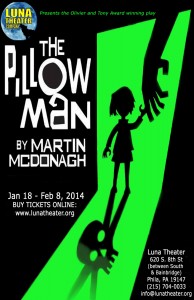 With all the claustrophobia of an Otto Dix painting, Luna Theater’s production of Martin McDonagh’s THE PILLOWMAN is a delicious 140-minute-anxiety attack. Robert DaPonte is remarkably arresting as Katurian Katurian, a writer of short stories who is cornered. His hands visibly shake as he sits wedged between his interrogators, the wry, aloof Tupolski (Ian Lithgow) and the brutish Ariel (Chris Fluck). The cool mint-green walls of the interrogation cell in an unnamed police state are closing in on him. As Sophocles’ Antigone, Katurian Katurian is fighting the timeless battle of the individual versus the oppressive state.

McDonagh does not need to attach a name to his police state. Instinctively, my mind reverts back to cold-blooded Nazi Germany. Deep into the second act, I felt like I needed straight up exposure therapy. McDonagh had me wedged between my two greatest fears: Nazis and my residual Catholic school girl dread of anything remotely related to the crucifixion of Christ. This is not a play you simply watch, it’s a play you survive. McDonagh ensures your survival by lacing his text with humor. Jokes delivered in a machine-gun rapid fire between Lithgow, DaPonte and Fluck leave the audience like panic-stricken school girls giggling in a flutter. McDonagh will make you laugh, but he will not let you breathe easy.

Director Gregory Scott Campbell chooses to produce a stringent bare-boned production, acutely understanding the power of McDonagh’s text. Taking his cues from absurdist playwrights like Eugène Ionesco, Caryl Churchill and Harold Pinter, McDonagh uses words as weapons. John Zak delivers an exquisitely nuanced performance as Michal, a man who endured years of harsh words (or much worse). He is a walking wound.

Some critics like John Simon in New York Magazine are so quick to pin labels on McDonagh’s brand of black comedy calling this: “creepy, grotesque, vile, or downright nasty”.

Yet, 17 hours ago, CNN posted a story with the headline: “Police: Maryland mom kills 2 of her children during attempted exorcism” and five days ago: “Dad of tortured boy Myls Dobson to be freed from jail to go to funeral.” So is McDonagh really twisted, or does he just love to watch CNN on the treadmill at the gym like me? January 18-February 8, 2014, http://www.lunatheater.org/.

One Reply to “THE PILLOWMAN (Luna Theater): 60 Second Review”