In The Bite in the Apple: A Memoir of My Life With Steve Jobs, Chrisann Brennan—Steve Jobs’s first girlfriend—wrote “Steve often said that he had a strong sense of having had a past life as a World War II pilot. He loved the big band sound of Tommy Dorsey, Benny Goodman, and Count Basie. At the first Apple party he even danced like he was from the forties. Steve as a young man with all that American ingenuity from a less encumbered time, with that simple sense of right and wrong.”

According the Brennan, Jobs was a complex boyfriend who wouldn’t settle for anything less than mind blowing tantric sex in the garden shed. In 1977, when Brennan told Jobs that she was pregnant with his child, he responded by running out the front door of the house as fast as his feet would carry him. On Friday, December 13th, this is how exactly how I responded to Philadelphia Theatre Company’s reboot of their 2007 production of NERDS. That’s right: I walked out.

In 2005, the thrice Emmy nominated writers, Jordon Allen-Dutton and Erik Weiner sat down with Seattle PI.com, and stated plainly:  We’re parodying the battle of Bill Gates and Jobs  “We’re not trying to tell a factual history.” But the facts of the story (like the quote above) are much more interesting than anything on the PTC stage. Allen-Dutton and Weiner are in their mid-30s, but fill this musical with jokes that thirteen-year-old boys would scribble in marker in bathroom stalls.

Upon meeting a young Steve Jobs (Matt Bradley), twenty-year-old Gates (Stanley Bahorek) says “ I can give you a hand, Jobs.” Offering him cocaine, Gates  asks “You want some blow, Jobs?” The cast snickers, the audience laughs uncomfortably. Bahorek turns to the audience and asks: “What?”, forced to drag out a joke that would fall flat on its undeveloped ass at any open mic night.

The cheapest seats in the house are going for $51 so you would expect to see a little sophistication, wit, and grandeur typical in the great American musicals. Your audience is filled with hard-working aging baby boomers who may not appreciate your young cast of talented singers prancing on stage dressed as ridiculous cartoonish versions of icons of their generation: Ghahdi and John Lennon, just to name a few. 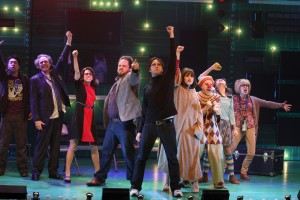 Frank Loesser’s How to Succeed in Business Without Really Trying won the Pulitzer Prize for drama in 1962. The story concerns young, ambitious J. Pierrepont Finch, who, rises from window washer to chairman of the board of the World Wide Wicket Company. Steve Jobs and his buddy, Steve Wozniak, began building their own computers from scratch in Jobs garage in 1975, but essentially Jobs story reflects Finch’s. So why did How to Succeed snatch up seven Tonys after running 1417 performances at the 46 Street Theater in October of 1961? It did not beg with sweaty insecurity for laughs like this self-conscious production of NERDS.

The stand out performance is produced by Benny Elledge as Steven “Woz” Wozniak and Lexy Fridell’s knock out brassy pipes kept me locked to my seat up until well into the second act. I was willing to see this show to the end out of respect for these young actors who rehearsed like mad at Manhattan’s 42nd Street Studios before landing in front of me in Philadelphia. It is difficult to perform a show when you’ve had almost no time to work in the theater before opening. Singing, while dancing, eight shows a week, with a mic attached to you is a more difficult feat than than building a computer in your garage. So I was determined to keep my ass in the $56 seat.

Then in the opening number of the second act, “Down and Out in Silicon Valley,” Kevin Pariseau as Tom Watson, portrays a broadly drawn crack addict. Announcing in a zinging punchy-happy tone several times that he smokes crack. Crack was the punch line, and the announcement extracted desired laughs from the audience. I laughed at Dave Chapelle in 2003 when he covered his mouth in white powdery substance as the crack head Tyrone Biggums and announced to a room filled of children how to buy drugs from guys named Martinez. I laughed because Chapelle made himself the joke in a thoroughly drawn sketch. I laughed again in 2006 when the Dee and Denis got addicted to crack with the intention of qualifying for welfare benefits in an episode of It’s Always Sunny In Philadelphia.

So I sat in the dark, face pale with disgust wondering why crack used as punch line in this show bothered me so much? Perhaps because Always Sunny and Chapelle Show used crack as a comedic device, but in the end they made the characters the joke.

I did not head for the exit until a few scenes later. Jobs and company are huddled in a garage in a circle of fold-out metal chairs. Kevin Pariseau, as the same disheveled crack head in a suit says: “Oh, this isn’t a Narcocotics Anynmous meeting?” The audience laughs again, but I was gone. Addiction is a disease that many great theater professionals have endured. This review is not a public service announcement, but I fear that the technology that this show celebrates has left us with hard hearts.

I didn’t stick around to find out if the next joke would be about a random veteran with PTSD mistaking the garage for a VA hospital. As Steve Jobs said his brilliant 2005 commencement speech at Stanford University, “All you really have in life is time.”

In the playbill, which I read on my way home, Allen-Dutton is quoted as saying something almost brilliant: “Writing a musical about technology is like Shakespeare trying to write Henry IV during the Battle of Agincourt.”

Kathryn Osenlund reviews for Curtain Up.