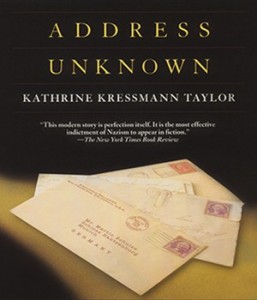 Reading history is like watching a familiar play: the fascinating thing is that the characters don’t know what’s going to happen. But sometimes you come across a piece of fiction written on the cusp of great historical events imbued with a clear sighted vision of how the epoch is unfolding. Adapted by Frank Dunlop from a 1938 novella by Kathrine Kressman Taylor, ADDRESS UNKNOWN is one such work. (The best example might be Graham Greene’s A Quiet American, a prescient look at U.S. involvement in Vietnam, published in 1955.)

ADDRESS UNKNOWN unfolds through epistles between two Germans who left the country following its defeat in World War I, setting up a successful art business in California. Flush with New World wealth, Martin Schulse (Seth Reichgott) returns with his family to a homeland impoverished by reparations and inflation. Alone in San Francisco, his Jewish business partner Max Eisenstein (Earnest L. Philips) envies Martin’s homecoming to a democratic country free from the illiberal force of Prussian militarism.

Martin’s return occurs just as Hitler is coming to power, a coincidence unremarked upon in the first couple letters, but which becomes crucial. Martin sees “hope again” as “a leader is found” for a broken Germany. From California, Max is increasingly distressed at news of anti-semitism: “a sad story familiar through centuries of oppression” but unexpected from “a civilized country.”

Quick-paced and surprisingly dramatic under Neill Hartley’s direction, ADDRESS UNKNOWN is a parable rather than a subtle character study. Written in 1938 to awake the American public to the dangers of Nazism, it was a propaganda book, but a most-justified one. Though Hitler would unleash progressively worse evils, his immorality was unmistakable from the first.

In the play, Martin falls under the sway of a more nefarious propaganda than Taylor’s, becoming a Nazi official and donning a swastika armband. When a letter to Max’s niece comes back stamped “addressee unknown”, Max writes to his old friend in desperation, but Martin no longer wants to receive his correspondence. In the censorious climate of the new Germany, he fears communicating with a man he once called “uncle”. Max exploits this well-founded but wrong-headed fear to devastating—and devastatingly hilarious—effect. ADDRESS UNKNOWN builds to a neat and morally satisfying conclusion: an Inglourious Basterds writ small. November 7-24, 2013, meadowbrookproductions.net.