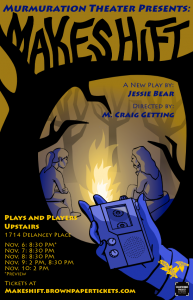 Strange games are afoot upstairs at Plays and Players. Not light or fun games, either—we’re talking full-on Don’t-talk-about-our-son-Martha! games here. Murmuration Theater’s new play MAKESHIFT throws us right into the middle of two different stories, and figures we’re smart enough to figure out what’s going on. The show doesn’t dole out much information, and when it does, it’s timed for maximum effect. Once you get enough to realize the show’s central conceit (which is quite nice, and unfolds so organically that I’d hate to spoil it), the earlier scenes come into better focus and make more sense. About the two stories—they really are radically different, occupying separate but (thanks to thematically-appropriate double-casting) overlapping realities. Half of the scenes in this show are so realist they’d make Chekhov cry “Uncle!”

The other half center around characters who could call the Island of Misfit Toys home. Even though these characters are purposely rough and unfinished, the actors spring to life when inhabiting them—they are a joy to watch. In fact, the dreamy logic of this half frees the show to communicate character and motivation far more effectively than the other half, which eventually winds its characters into such high (and loud!) dudgeon that it’s hard to stay emotionally connected to them. When everything settles down, though, and all the pieces have clicked into place, what you’re left to discover is something sad and beautiful—the dull ache left by something very important which you long ago forgot you’d lost. [Upstairs at Plays and Players] November 6-10, 2013. murmurationtheater.wix.com, Tickets.

Read another Phindie review of this show.