Not everyone will be on filmmaker Riley Stearns’ oddball wavelength, but it’s the viewer’s choice. In the case of droll, tightly-scripted sci-fi black comedy “Dual,” they’ll wish they could be. In what is very much from Stearns’ voice, the film is dryly comic, offbeat, and anchored by dual performances from Karen Gillan that are subtly disparate but equally deadpan and finely tuned.

Set in the near future, “Dual” doesn’t begin with a long-winded scroll about the status quo, nor does it get bogged down in world-building. Writer-director Riley Stearns (“The Art of Self-Defense”) trusts his audience enough to just settle into this version of the real world and let the story unfold without much hand-holding. Stearns puts a viewer on edge from the very beginning with a droning hum. There seems to be something of a lethal duel between two men (Theo James) being played on a football field, complete with spectators in the stands and a videographer capturing it all as if it were a Friday Night Lights game by way of “The Hunger Games.” And then the story proper begins. 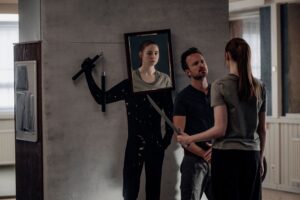 The over-eating and over-drinking but underachieving Sarah (Karen Gillan) might as well be all alone in her life. Her boyfriend (Beulah Koale) with whom she video chats seems to always be away on business, and she tends to ignore her nagging mother’s phone calls. Once she’s diagnosed with a rare terminal illness, Sarah opts for “replacement,” a cloning procedure that will (with Sarah’s wishful thinking) ease her loved ones’ grief. With a tube of Sarah’s spittle and just an hour-long wait, Sarah’s double is created and wants to be a better version of the real Sarah. Ten months later, a margin of error in the doctor’s test results miraculously makes Sarah experience complete remission, and that changes things a tad when Sarah wants to have her double decommissioned, but those in Sarah’s life prefer the double. Sarah’s only chance to remain the one version of herself on this planet (and not a dual pair) is through a court-mandated duel to the death. Get the title now?

There’s a detached, monotone delivery to how everyone speaks, as well as a blunt honesty not unlike Ricky Gervais’ “The Invention of Lying.” When the doctor tells Sarah in a poor bedside manner that she has a 0% chance of living, Sarah can’t even emote. The doctor then tries using a baseball analogy to soften the blow, “In this case, you’re the batter, only you’re not even holding a bat, so you most definitely are going to miss the ball.” This overall tonal approach, in turn, makes the despairing ideas of existence and alienation go down a bit easier.

A likable Aaron Paul keys into the impassive absurdity quite well as the real Sarah’s duel trainer Trent, who makes her skilled in combat and gets her on a diet of watching very badly acted but very violent movies. In one of a few inspired moments, the two of them practice Sarah’s duel, where they pretend to be in slow-motion while narrating their own moves. An alternative payment for Trent’s training also doesn’t play out as expected, with a hilarious payoff (you’ll know it when you hear Lil Jon & The East Side Boyz’s “Get Low”).

Darkly funny but also ultimately devastating, “Dual” zags when you think it will zig but always feels like a whole piece. It’s more emotionally forthright about mortality than expected, while going against the grain with a less direct but nicely ambiguous conclusion. As the saying goes, “dying is easy, comedy is hard,” but “Dual” pulls both off with aplomb.