As the world reaches out a hand to help the Ukrainian people amidst the Russian invasion, the local Philadelphia theater community is finding its own ways to contribute. In solidarity with Ukraine, the Wilma Theater presents a special event next week featuring the work of Ukrainian playwright Natal’ya Vorozhbit, raising money for those affected by the war.

The Wilma announced a reading of Vorozhbit’s play Bad Roads as a one-night fundraiser supporting the Voices of Children Foundation, a Ukrainian non-profit that supports children’s mental well-being during and after armed conflicts. 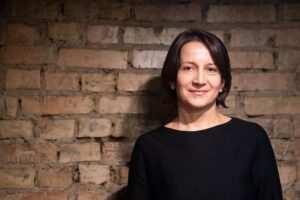 Bad Roads is a wartime story set during Russia’s 2014 invasion of Ukraine. Premiered in London in 2017, it has been described as heartbreaking, powerful, and bitterly comedic all at the same time. Vorozhbit has written several other plays, including The Khomenko Family Chronicles, The Grain Store, and Maidan: Voices from the Uprising, and is the co-founder of the Theatre of the Displaced in Kyiv. This translation of Bad Roads was done by Sasha Dugdale.

“One of the values of the Wilma is a commitment to liberation,” says lead artistic director James Ijames. “That is being threatened right now and anything we can do to support the Ukrainian people falls squarely in line with our missions and our values.” All proceeds from this event, in solidarity with Ukraine and its people, go to the Voices of Children Foundation, which is currently involved in assisting evacuations from Ukraine and aiding children affected by the war.

The show is scheduled for Thursday, March 31 at 7 pm, and features members of the HotHouse Acting Company. It is directed by Yury Urnov, the Wilma’s Russian-born co-artistic director, and contains depictions of sexual assault and violence. All tickets are pay what you will donations, and masks and proof of vaccination are required.