They glare at each other across the magnificent fireplace in the Frick Museum in New York City. The two famous Hans Holbein portraits of Thomas Cromwell and Thomas More face each other in this clever hanging of two wonderful paintings depicting mortal enemies.  These 16th century lawyers were both, ultimately, beheaded by Henry VIII.

Sir Thomas More is the hero of Robert Bolt’s play, A Man for All Seasons; he is the virtuous Catholic who defied the king when Henry made himself head of the Church of England in order to rid himself of one wife and marry another. More is the man who can’t see facts without that “moral squint.” Cromwell is his antagonist, a Machiavellian who, in the end, wasn’t shrewd enough to save himself. You may already know Cromwell as is the hero of Hillary Mantel’s trilogy and the play Wolf Hall. 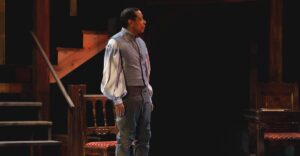 What a brave return to live theater this production is!  Lantern Theater Company gives us old-time drama and powerful theater, full of big ideas and complex language, rather than a bit of fluff to amuse or console us. With a top-notch cast and clever direction by Peter DeLaurier, it’s a heady three hours.

Three of Philadelphia’s finest actors are back on stage together. It’s a dream cast with Frank X, Anthony Lawton, and Scott Greer. Frank X plays More in an enormous role: seemingly calm and always a step ahead of everybody intellectually and strategically; Erasmus called him “The English Socrates,” the keeper of the nation’s conscience. X’s performance is unflinching and moving, starting as a charming head-of-family, with a devoted wife (Mary Elizabeth Scallen) and daughter (Morgan Charece Hall – who stunningly speaks fluent Latin) who “keeps the secrets of his heart.” Their sunny affection will turn dark by Act Two when we see the results of More’s trust in his friendship with Henry – a grave mistake.

Anthony Lawton plays Cromwell as slick, fierce, powerful. He struts, he rages, he connives. The histrionics are fabulous. He wins, but only temporarily.

Scott Greer—who never misses a comic beat (wait for the hat!)—plays The Common Man, in other words, a butler, a jailer, a boatman, and any servant anybody needs. He, too, is clever; he manages not only to collect tips but to stay alive.

The rest of the cast, playing a variety of noblemen and churchmen, is without a weak link: Jake Blouch, Benjamin Brown, Paul Harrold, and Gregory Isaac.

One Reply to “Lantern Theater’s Brave Return to Stage: A Man For All Seasons”