Here’s an overview of some of the shows coming to the stage in Philadelphia this month.

Carroll County Fix
Two best friends are working together to tell the story of their small town, but with Rachel having just come back home from college and Tess desperate to escape Carroll County, they find that their viewpoints on their rural community are not the same.
March 2 – March 20
Pay what you decide, no minimum
Azuka Theatre at the Proscenium Theatre at the Drake, 302 S. Hicks St.
azukatheatre.org 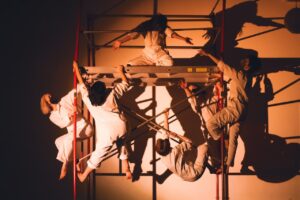 ‘Night Mother
Nominated for four Tony Awards and winner of a Pulitzer Prize, ‘Night Mother tells the story of a struggling woman named Jessie and the argument she has with her mother that gets at some of their deepest thoughts and emotions.
March 4 – March 27
$25
Isis Productions at Christ Church Neighborhood House, 20 N. American Street.
isisperforms.com

A Man For All Seasons
As Henry VIII rejects his first wife, Catherine of Aragon, his Lord Chancellor, Sir Thomas More, is caught in the middle of this political game, attempting to uphold his conscience and principles while preserving his life.
March 10 – April 10
$25-$41
Lantern Theater Company at Plays & Players Theater, 1714 Delancey Place.
lanterntheater.org

The Alchemist
Though originally written for the reopening of London theaters after the plague of 1610, The Alchemist is a timely play for 2022, a comedic romp about employees gone wild when their boss leaves during the middle of a pandemic.
March 11 – April 9
$20-$59
Quintessence Theatre Group at The Sedgewick Theatre, 7137 Germantown Avenue.
Quintessencetheatre.org

Waitress
This hit Broadway musical arrives at the Kimmel Center, featuring an all-female creative team, the story of a waitress and pie-maker named Jenna as she tries to turn her life around.
March 29 – April 3
Kimmel Center for the Performing Arts, 1420 Locust St.
kimmelculturalcampus.org