Excerpted from Nealspaper.com by kind permission. 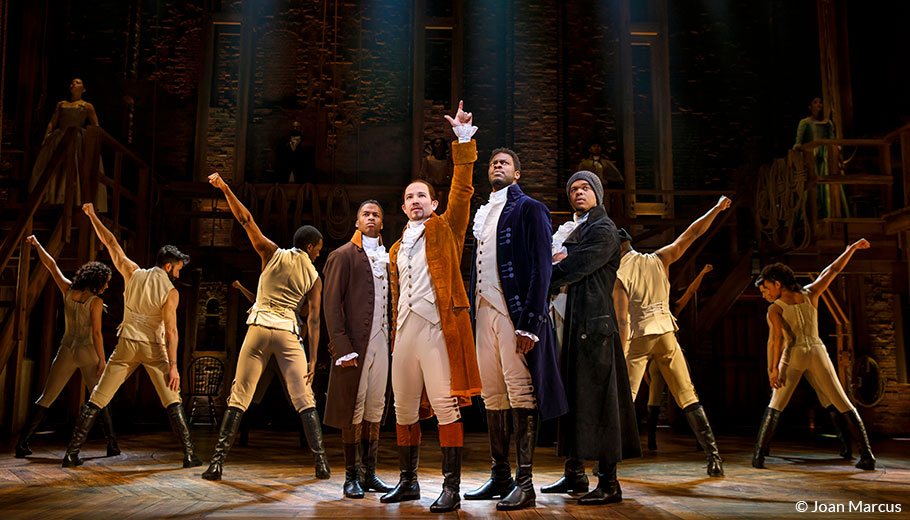 In HAMILTON, Lin Manuel Miranda manages to ace a feat that has daunted and defeated many. He has taken a person from history and depicted his significance in a way that holds interest and delves into the intricacies, and even the contradictions, of that figure. Writing music and lyrics, Miranda realizes a comprehensive seminar in the nascent United States with nerve and verve that keeps the drama inherent within his rap libretto immediate and captivating. “Hamilton” never flags or fails to demand complete attention and interest. It takes the epic and makes it accessible, even to people who find history dry and would drive splints through their eyes before they would pick up a history book.

HAMILTON takes almost two-and-a-half hours of stage time to unfold, but one of Miranda’s flights of genius is to cover so much ground so snappily, giving Alexander Hamilton’s hurry, industry, and conflicts a whirlwind pace accurate to the man’s life, then slowing down for an equally gripping last 40 minutes that allows more pathos and concern to enter, as Hamilton copes with sideline retirement, the death of his son in a duel that foreshadows his fatal encounter with Aaron Burr, and his eventual showdown with Burr.

Director Thomas Kail keeps the play in constant motion, employing concentric circle and starburst patterns that create both intensity and a frame for whatever the singer of the moment is presenting. Orchestrator and music supervisor Alex Lacamoire’s creative management of Miranda’s score keeps HAMILTON musically hormonal and shows its mettle in that last quarter when Miranda and Lacamoire scale back to half to concentrate more closely on story and character dynamics.

The sweep makes any venue, in this case Philadelphia’s already atmospheric Academy of Music, spring alive with word, song, light, and vivacity that all serves history in a way it has never been served before.

It is not a great theater piece, but it is admirable as a presentation of history.

The current production marks “Hamilton’s second appearance in Philadelphia, and it outshines the excellent 2019 staging, mostly because of the searing performances of Pierre Jean Gonzalez as Hamilton, Stephanie Jae Park as Eliza, Warren Egypt Franklin as Jefferson and Lafayette, Elijah Malcolm as Philip Hamilton, and Neil Haskell as King George. Gonzalez is commanding in the title role, vocally and physically establishing Alexander Hamilton as a force, to savor and love as well as to reckon with. Jared Dixon captures the slyness and easy sophistication of Burr, always the classiest person in a room though miffed that Hamilton is the smartest.

HAMILTON’s artistic excellence includes the flexible and creative costumes of Paul Tazewell, who has his chorus in foundation garments that make it easy for them to slip on the right chemise, coat, or gown to dress a scene, the resourceful set of David Korins that allows for speedy traffic, Blankenbuehler’s darts and whirlpools, and some handsome rooms, the sound design of Nevin Steinberg that gratefully stays at a level that keeps Miranda’s lyrics audible and easy to understand, and the exquisitely evocative, revealing, and mood-creating lighting of the late Howell Binkley, to whom the company dedicate this superb production.