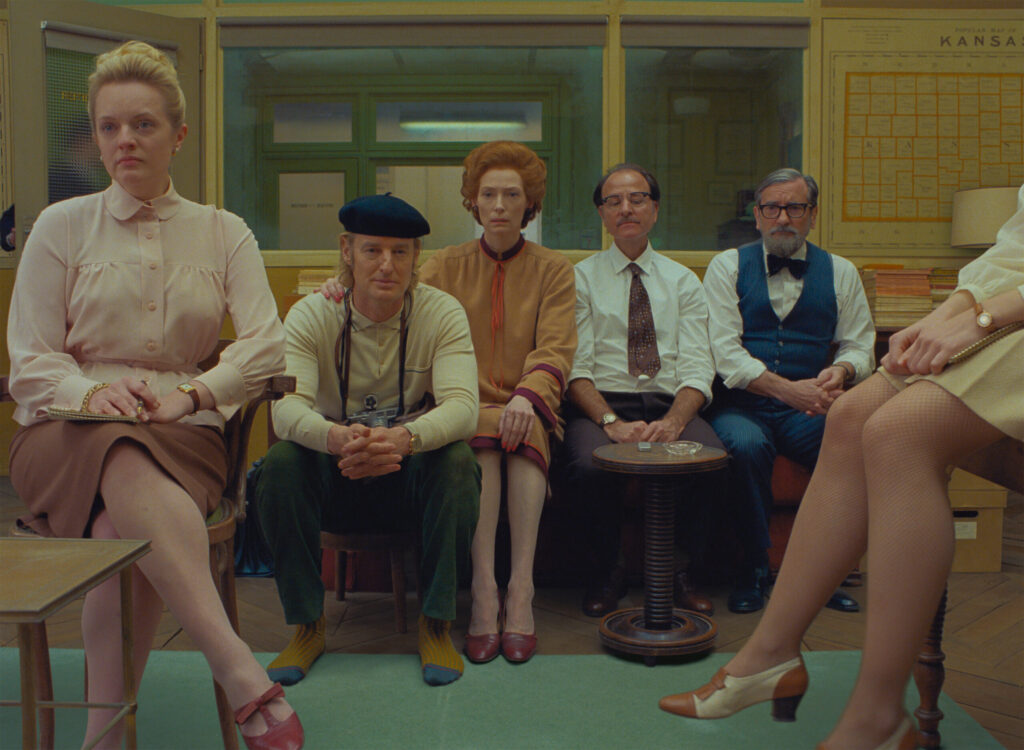 No matter what you think, you don’t have Wes Anderson pegged.

Okay, so The French Dispatch is a series of vignettes based around a fictional French town and the New Yorker-style newspaper run by Bill Murray that covers its goings on. Yes, it has a meticulously curated color scheme. Yes, cinematographic symmetry. Mid-century aesthetic. Tilda Swinton.

… but this one’s different, I swear.

The French Dispatch feels less like an outgrowth of an auteur’s artistry than an invitation to peek inside his brain. He said yes to any idea that came his way in the making of this movie. It is not one idea but at least fifteen. Watching it is like a rollercoaster ride. Or, perhaps a more Andersonian image, a log flume? Or whatever the It’s A Small World After All kinds of rides are called. Watching it is like leisurely floating along in a boat on a track while (almost too) many things happen around you. It’s bright, colorful (even in black and white somehow?), animated (in some parts, literally), and while his characters are decidedly not rote animatronics, they somehow feel like they’ve existed for decades doing their thing before you entered the room and will continue to do their thing long after you exit.

The film reaches corners of Anderson’s world, depths of his imagination, that are not exactly unexpected, but still surprising. His wide shots of the fictional French town of Ennui (chef’s kiss) contain so much depth that the streets roll into the distance forever. There are long shots of full-frontal nudity, more death than usual, a brief line by actor Jeffrey Wright about loving the wrong way that spoke more of outside Anderson’s world than within. For a filmmaker who doesn’t work in explicit metaphors or commentary, that moment felt like seeing a stream of light shine in through a crack in the ceiling.

And indeed, The French Dispatch has something darker operating beneath its agile dialogue and energetic business. It’s a self-described love letter to journalists, and in the film’s final moments runs a list of notable journalists for whom the film is specifically honored. It’s utterly touching, but why now? Some years removed from a post-truth journalistic appreciation moment best captured by 2017’s The Post, the timing of The French Dispatch hints at a feeling of loss on Anderson’s part.

The film’s framed by the death of Bill Murray’s character, who believed in plucky people with ill-defined worth to those outside of the magazine. He kept an employee on the payroll for decades who has never written a word toward a publishable piece, but mills around the office reading, eating, contributing ideas to others in the room. In Anderson’s world, people like that have value. With the passing of the magazine’s editor and the subsequent shuttering of The French Dispatch, that value is not immediately called into question. But we fill in the gaps. Our present defines value with ravenous fervor.

Living in Ennui for 108 minutes was delightful, much like any Anderson movie. But I told you, this one’s different. I didn’t leave the theater taking the color of his world with me. Rather, his world dissipated around me, and the darkness in which I was left just felt empty. I was nostalgic for a place that doesn’t exist in a time before I existed. I wanted back on the ride.