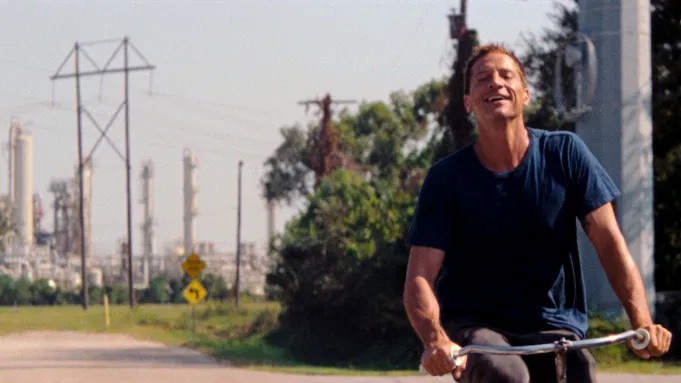 Sean Baker has built a career making films that shed a light on fringe communities by involving them in the stories he seeks to tell. These stories are emotional, realistic, and magical in their own strange way. With Tangerine we got a kinetic window into the world of transgender sex workers. In The Florida Project we saw not just the world of knock-off Disney hotels, but the lives of people who treat them as their prime residence. With his latest, Red Rocket, we spend some time in Texas City, Texas, a town near Galveston that is home to a petroleum-refining/petrochemical manufacturing center. It’s a place where meth use is common, guns are ubiquitous, and you might get your ass beat if you are accused of stolen valor.

It’s no accident that the film is set during the lead up to the 2016 election, and focuses on an area that is pretty thoroughly pro-Trump. Throughout the film we see footage of many famous video and sound bytes from debates and interviews from that gilded time just before America, when tasked with choosing between two awful Presidential candidates, decided to lose its mind. Baker doesn’t come across nearly as cynical as I do, however, made clear by the way he refuses to judge his characters under pretty much any circumstance. Yes, a lot of fun is had in depicting a group of people who use hard drugs and have more fingers than teeth, but Red Rocket finds the humanity in every last one of them. Their houses are small and dirty, their free time spent chain-smoking and watching TV, but they have human hearts through which pumps undeniably American blood. So to say that the film supports any one political stripe is inaccurate. Red Rocket is not an outwardly political film so much as it is a humanist one, which allows for the story to go to some seriously dark and murky places.

Simon Rex, who, as I understand it, was offered the role with just three day’s notice, brings a manic energy to every moment that is often gut-bustingly hilarious, but never is his Mikey without depth. His is not an empty mania, but one that is based on a strong characterization (that, of course, of a narcissist). It’s a truly exceptional performance that capitalizes on Rex’s physique and unique comic energy (Scary Movie 3 rocks, fight me). His co-star Suzanna Son lights up the screen in every moment. Son is 25 in real life (so we don’t have to feel too ooky here in the real world when she behaves in very very adult ways), and has never acted before. Long story short, Baker saw her in a movie theater lobby and offered her the role. Funny that his approach was similar to Mikey’s in getting the young lady into film — you just have to swap out a movie theater for a donut shop, and Baker’s likely polite and non-creepy air for Mikey’s general scumminess.

Red Rocket is a wildly funny movie, but to call it an outright comedy would be inaccurate. I guess that’s true for all of Sean Baker’s work. He’s a genre unto himself. And keeping his trend of filming in atypical ways, Red Rocket was shot on 16mm film.