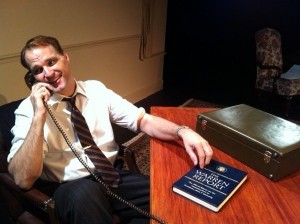 With all the mud-slinging in the current American presidential campaign and negativity about the state of our nation, it is an appropriate time, before the November election, to reﬂect on an earlier period of high ideals in the midst of horrendous tragedies. New City Stage Company shows the best and the worst of the Sixties through the eyes of one of its key players and casualties, in its Philadelphia premiere of Jack Holmes’s RFK.

Company founder and artistic director Ginger Dayle, in a splendid directorial debut, transports us to the last years of Senator Robert F. Kennedy’s life, 1964-68, from LBJ’s rejection of him as a vice-presidential running mate to his assassination in Los Angeles after his victory in California’s presidential primary. To set the stage for Holmes’ biographical monologue, Dayle culled through to innumerable recordings of the popular music that deﬁned the Sixties. In collaboration with sound and video designer Ren Manley, her selections were employed to create an affecting audio-visual ambiance of history and nostalgia for the Kennedy years, from the moment you enter the theater, continuing during the intermission, and interspersed throughout the performance.

And what a performance! NCSC’s co-artistic director and award-winning actor Russ Widdall is nothing short of remarkable in his two-hour, two-act portrayal of RFK. He masters the Senator’s outward physical mannerisms, his walk, and his famous Massachusetts accent. But more importantly, he captures the inner psychology of the man—his lifelong feelings of inferiority to his brothers, his emotional turmoil over the war in Vietnam and the American struggle for Civil Rights, his guilt over JFK’s assassination, and his defenses against recurrent accusations of nepotism, inexperience, and opportunism, as well as his ultimate commitment to his family, the underprivileged, and the challenge of making America the best it could be. Widdall’s profound empathy for RFK elevates the well-researched show from a mere impersonation of a famed icon to a work of keen insight and humanity.

Regardless of your politics, party afﬁliation, or age, you should appreciate the extraordinary quality of Widdall’s acting and Dayle’s production. Audience members who experienced the American Sixties ﬁrsthand will recall all the events and emotions depicted in RFK; those who didn’t might ﬁnd important parallels between those years and our current troubled times. October 3-21, 2013, newcitystage.org.