I will never forget the first time I heard the phrase “The Conjuring Universe.” It was first used in a trailer for one of the many spin-offs of the 2013 haunted house flick that set the tone of studio horror for many years to come. I remember thinking “oh wow, that is precisely what they’ve been building – A Conjuring Universe!” Funny to think that I felt so incredulous despite the fact that the construction of cinematic universes had become par for the course for many properties. It made sense: every year we’d get another smaller entry in the canon, be it Annabelle or The Nun, and then every few years we’d check back in with Ed and Lorraine Warren as they battle some larger supernatural threat. These tentpole films would represent the Avengers of the cinematic universe equation, and as evidenced by a few years of regular output, would be the higher quality, classier entries in the series.

For the third round of tentpole The Conjuring films, we see the departure of James Wan, whose creative direction was one of the highlights of the series thus far. In fact, it could be argued that in his two entires, which are essentially mashups of every ghostly trope imaginable, it was the direction that largely kept them feeling so fresh. This time the directing duties go to Michael Chaves, who helmed The Curse of La Llorona, perhaps the weakest entry in this particular universe, and while he does a very good job in delivering a pretty looking, decently effective movie, Wan’s absence is severely felt. The bad news here is that The Conjuring: The Devil Made Me Do It feels much less like a Conjuring film, and much more like a Conjuring spin-off. The good news is that, of all the spin-offs, it’s one of the better ones.

For this third rodeo, we once again connect with Ed and Lorraine Warren, the ghost-fighting duo who, despite being charlatans in real life, are, in this world, two extremely compelling characters. They love one another dearly, and share a unique desire to be the wall of flesh preventing supernatural malfeasance in the world of the living. They are devoutly religious, extremely giving of themselves, and unwilling to capitulate to anyone who accuses them of dealing in nonsense. Their current mission is different from that of prior films in that they aren’t dealing with a haunted house per se, but rather with a possession. The film opens during the exorcism of a young boy. Furniture flies, voices are altered, a priest whose entrance mirrors that of Father Merrin in The Exorcist shows up to dish out Christian justice — you know the drill. It’s an intense opening, and amidst all of this ghostly calamity, Ed suffers a heart attack as spurred on by the magical powers of the demon he’s trying to fight. 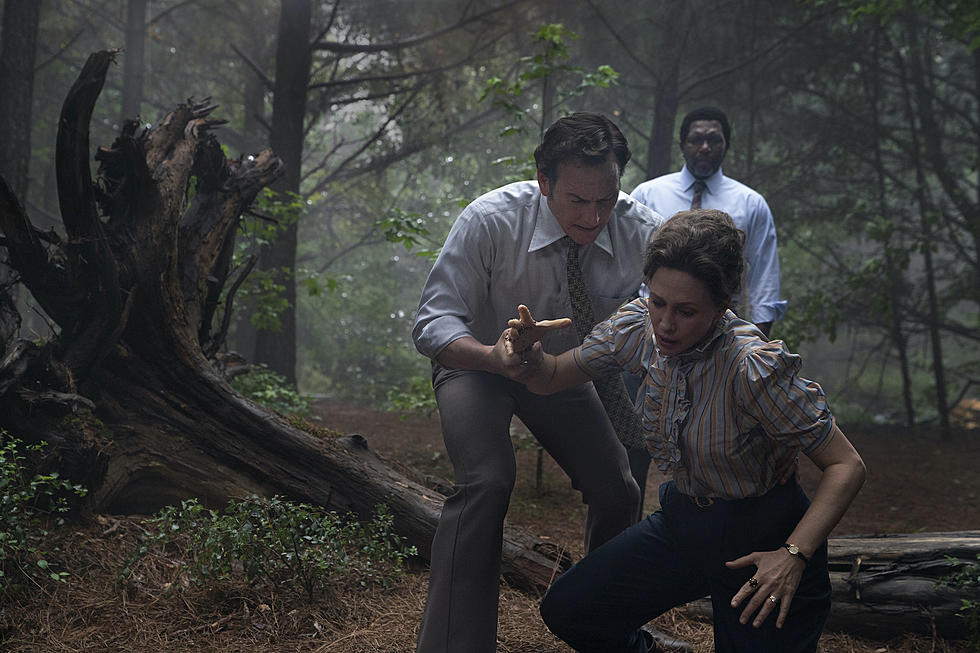 In a fit of selflessness, a young man associated with the possessed boy invites the evil spirit to leave its current host and enter his own body. At that, all of the spooky stuff stops and life goes back to normal for the affected family. This peace is only temporary, and soon the newly possessed young man murders his landlord and is facing the death penalty as a result. If the Warrens can manage to prove that he was under the spell of a demon at the time of the murder, they may be able to save this man’s life.

Once again, this is based on a true story, emphasis on based on. In the real life tale, a man named Arne Johnson murdered his landlord and tried to use demonic possession as a defense in court. It didn’t work, and that’s pretty much the whole of it. Yes, the Warrens kinda sorta investigated some things adjacent to the case, all the while doing press for a ticketed photo/film roadshow that claimed to have proof of Arne’s claims. What the Warrens didn’t do was engage in a longform supernatural shriekfest where they fought demons and curses and bears, oh my.

And that last line is really what separates this from the previous entries in the series proper: this is mostly an empty shriekfest. Jumps, jolts, fast cut imagery of spooky entities, and any of a number of standard horror tricks are all employed to jostle the viewer in the moment and fade from memory immediately after. The dread and ingenuity that defined the well-designed terrors of previous entries is gone entirely, making way for scares so telegraphed that they feel perfunctory. I will note that a lot of it is shot beautifully. A few of the establishing shots of the setting at large are actually quite remarkable to look at. Also, the design of the various beasties is inspired and ooky, but their application is as by the books as they come.

The performances are where the film is at its strongest. Both Patrick Wilson and Vera Farmiga fall right back into their wonderful chemistry as Ed and Lorraine, who are even more the main characters than they were in The Conjuring 2. Much like part 2, however, this does create some emotional distance from the folks being directly haunted. Both Ruairi O’Connor and Sarah Catherine Hook, as Arte and his very committed fiancée, work hard to bring some feeling to their characters’ plight. They do a bang up job of it, but the material to support their performances just isn’t there. Still, I found myself caring about their well-being, which is more than many movies of this kind can claim.

At the end of the day The Conjuring: The Devil Made Me Do It is the type of movie that, if it weren’t part of the universe, would be called a “half-decent Conjuring knockoff.”  It’s far from the worst way to spend a night at the movies, but it’s a disappointing entry in the Conjuring canon.

And that title! ALL OF THE UGH. The Conjuring 3 would have worked just fine.

Released in Philadelphia and the United States on June 4, 2021, and for streaming on HBO Max.