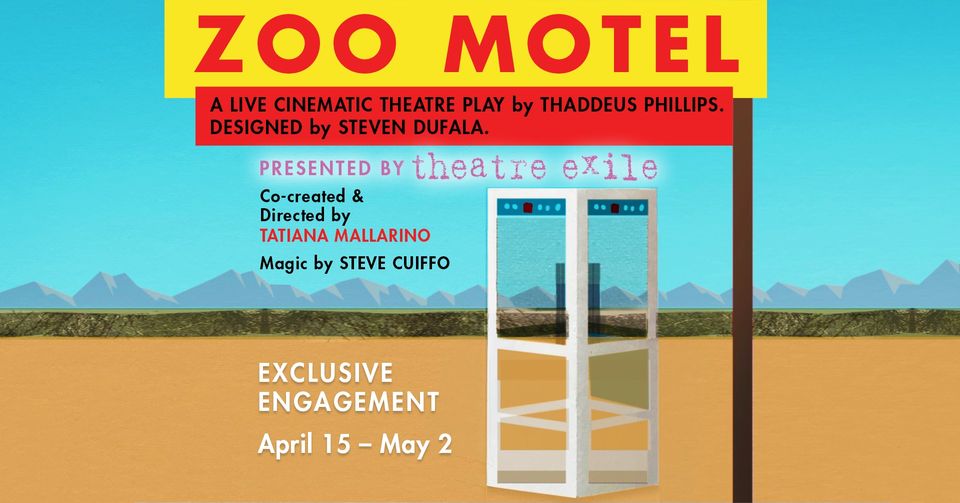 During the recently renewed run of the global pandemic, live theater has been challenged to adapt to a virtual stage. Zoom theater opens up possibilities but the concern has been could it mimic a live theater experience with an audience comfortably covered in blankets, and getting attacked by playful cats? Theatre Exile’s Zoo Motel makes a strong case for the value of zoom theater as a new art form by creating an experience that captures the spontaneity of live theater while maintaining quarantine.

Zoo Motel, created by Thaddeus Phillips and director Tatiana Mallarino, is an existential one-person show about a character who checks into a motel room only to find himself stuck inside. Dealing with the frustration and claustrophobia of being forced into a confined area, Thaddeus explores the attractions of his room including the Mojave phone booth and the Otsuchi wind phone. Using models, tricksy camera positioning, and creative set designs by Steven Dufala, this play breaks down time and space traveling from plane rides that shift to the frozen edge of Iceland to watching the Titanic touch the far reaches of space. Then it guides us back home via Starlite drive-ins and shadow puppets. As Thaddeus enacts the story in real-time in his converted home space, the visual effects give the sensation of watching a live-action animation play.

Zoo Motel catches perfectly the quarantine vibe of feeling isolated, alone, and somehow simultaneously overexposed. By delving into loss and the listless feeling of having no ideas despite only having time to think, Zoo Motel is a universal and unifying experience. All the guests are with him, checked into their own rooms in which they cannot leave. As Phillips accepts his surroundings, he becomes inspired to create new ideas for his productions. It provides a hope through this seemingly never-ending pandemic that out of this will come invention and a fresh art form that hopefully continues long beyond our quarantine ends.

Zoo Motel is an interactive experience with other audience members visible to each other. Make sure to print out all the sheets of paper provided in your registration package, if you can. And as instructed, have a deck of cards on hand as the magic created by Steve Cuiffo works best when you follow along at home. Zoo Motel is the experience many of us have sought for the last year. It is a way to connect to theater, without leaving our couches. Phillips and Mallarino are on to something special and have united the mediums of home viewing with live theater in a way that betters both art forms. Giving us the joy of theater, while our talisman cats can save us from getting lost at home.

When: April 15–May 2, 2021
Where: Virtually streamed through Zoom. A Link to the show will be emailed after your purchase.
Cost: Tickets are $40 at theatreexile.org