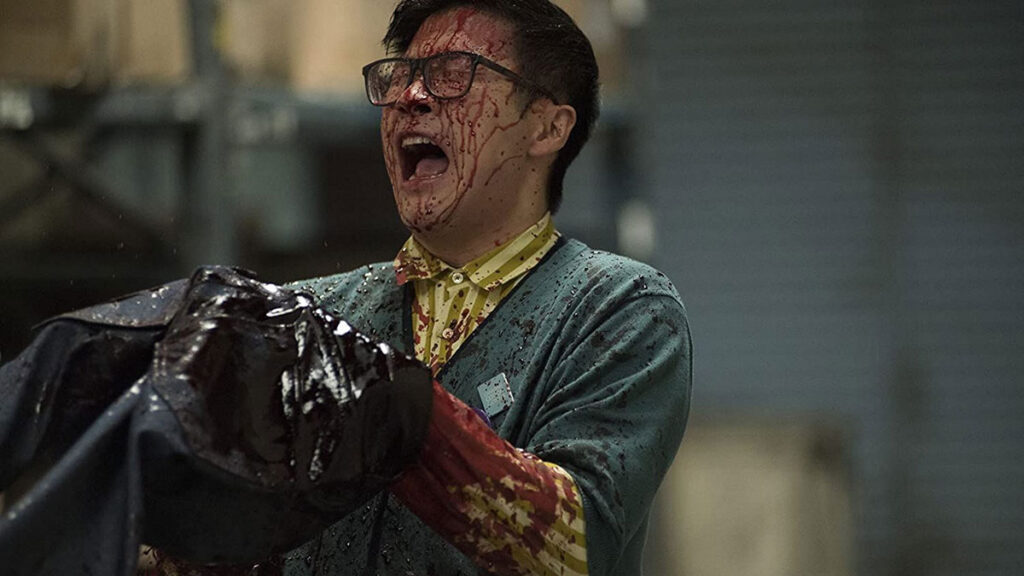 Slaxx is an easy sell, and it’s a purchase that any self-respecting fan of genre film should have no problem making. The concept is absurdly simple and simply absurd: On the eve of a new product launch at a trendy retail clothing store, a pair of possessed jeans comes to life and starts killing the staff in delightfully brutal ways. It’s gory, goofy, and it wastes no time getting to the goods. Fun is the name of the game, but the film actually has something to say as well.

“Make a Better Tomorrow Today” is the slogan for the Canadian Cotton Clothiers, aka CCC. The company, lead by an activist CEO, prides itself in creating fair trade, non-GMO, organic clothing products. The company is marketed as the outlier in an industry built on exploitation. CCC is the clothing company that actually cares. Fashion, as they ostensibly see it, does not have to come at the expense of ethics, and it’s such platitudes which draw new-hire Libby (Romane Denis) to take a job at the chain’s flagship location. Her wide-eyed awe at the opportunity which stands before her is matched only by the ego and cynicism of her new co-workers. Sure, the outward presentation is one of sunshine and smiles, but the attitude on the floor is just like any other job (I suspect retail workers will enjoy the fun Slaxx has at the expense of retail culture). Each employee has a section of the store to handle. Did I say ‘section’? What I meant to say was ‘ecosystem’.

Tonight is the biggest night in CCC’s history. Fashion influencer Peyton Jules is coming by at midnight for the launch of the new Super Shapers jeans — the world’s first gender-inclusive, one-shape-for-all blue jeans. These jeans are designed to adapt to the body of the wearer, no matter what their shape or size. And with such unique technology about to hit the world at large, CCC is on full lockdown. This means that no one is allowed in or out of the store and all cell phone signals are scrambled (wouldn’t want anyone live-streaming any details now, would we?). What this also means is that when a pair of said jeans gains sentience and starts killing people indiscriminately, there’s no way to contact the outside world.

It’s absolutely insane, and oh so much fun.

Writer/director Elza Kephart (co-written by Patricia Gomez) keeps the pace high and the runtime tight, while employing very clever direction to bring the killer pants to life. A mix of puppetry and a green bodysuit (as indicated in a fun post-credits reel) keep the predatory pants feeling tangible and scary. This murderous legwear shares the frame with its victims, which is always important when it comes to a monster flick. Add to that practical blood effects and some impressively staged death sequences, all befalling a roster of colorful characters, and you’ve got yourself a riotous good time at the movies.

For a film with this a short of a runtime to have such thorough characters is a mini-miracle. A lot of them do coast on the stereotypes of “kids these days” and “management stooges” but only insofar as to establish a corral of victims for us to see gleefully dispatched. The characters who manage to, uh, last a little longer are quite well-realized, even if we don’t get to know a lot about their non-work lives. Their interactions with one another inform us of who they are, which allows us to avoid the tropey trappings of a slasher (jock, nerd, slut, etc). Major shoutout to Sehar Bhojani as the sarcastic Shruti and Kenny Wong as the snippy Lord for providing some of the film’s best gags. Also fantastic is Brett Donahue whose Craig, the store’s panicked manager, is willing to do just about anything to save his job during the massacre. It’s through the characters that we are given the thematic concerns of the film as well, namely that corporate activism is often hypocritically empty, and that a lot of the commodities we hold dear are only made available through the exploitation of those lower in the societal hierarchy. It’s a smart, relevant message in the midst of a profoundly goofy movie, and even in the shell of a modern slasher, the messaging feels right at home.

Classically, slasher movies have always had a morality play at their center, but the moral code being exhibited is typically dated. The messaging used to be “hey kids, drugs and sex are bad,” but Slaxx shows that we’ve moved on from such broad, archaic ethics. It’s fun to see the crass machinations of a splatter film being applied to contemporary concerns. It’s also fun to watch a sentient pair of pants dance to Bollywood tunes and drink blood from the corpses of a diverse array of egotists. It’s a perfect fit.