The Philadelphia Artists’ Collective (PAC) continues their 10th Anniversary season with our NEW VENTURE READING SERIES: 10-MINUTE PLAY FESTIVAL. Five new plays presented online in a reading format, each play, a winning selection from over 170 submissions from around the world, with a distinct cast, director, stage manager, dramaturg and playwright. PAC takes pride in hiring over 34 artists for the festival, especially during a time when artists are particularly hit hard by the effects of the pandemic. 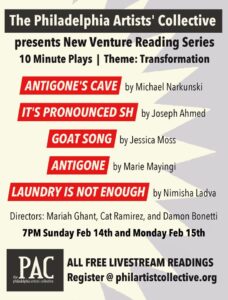 The New Venture Reading Series: 10-Minutes Play Festival will be presented online: Sunday, February 14 and Monday, February 15 at 7:00pm. Admission is free but all participants must register by going here or by visiting  philartistscollective.org.

For this year’s festival, PAC solicited submissions for new plays that responded to, refuted, or were inspired by a classical play. All submissions also had to adhere to the theme of TRANSFORMATION. Over 170 submissions were received from around the United States and some from as far away as China, New Zealand, England, and France. A reading committee of fifteen theater professionals, aficionados, and supporters reviewed the submissions through three eliminating rounds. At the end of the review period, five plays were chosen:

ANTIGONE’S CAVE by Michael Narkunski, Directed by Mariah Ghant
Antigone awaits her death in her prison cave, pondering the nature of fate and the doom of obscurity. She decides to take matters into her own hands.

IT’S PRONOUNCED SH by Joseph Ahmed, Directed by Cat Ramirez
Filmmaking meets an ancient play. Family traditions meet modern love. A Deer helps us through it all. Adapted from Shakuntala and the Ring of Recognition by Kālidāsa.

GOAT SONG by Jessica Moss, Directed by Damon Bonetti
In Ancient Greece, drama is changed forever, when one actor dares to step out of the chorus. A tale of bravery, breaking norms and the power of standing alone.

ANTIGONE by Marie Mayingi, Directed by Mariah Ghant
A retelling of Sophocles’ Antigone, set in France, that examines grief and the Black Lives Matter
movement. Two sisters struggle to deal with the aftermath of their brother’s death at the hands of
police. Their brother appears to help them make sense of it all.

LAUNDRY IS NOT ENOUGH by Nimish Ladva, Directed by Cat Ramirez
A simple household task brings a Mother and Daughter together to examine what’s really important and how two worlds can co-exist.