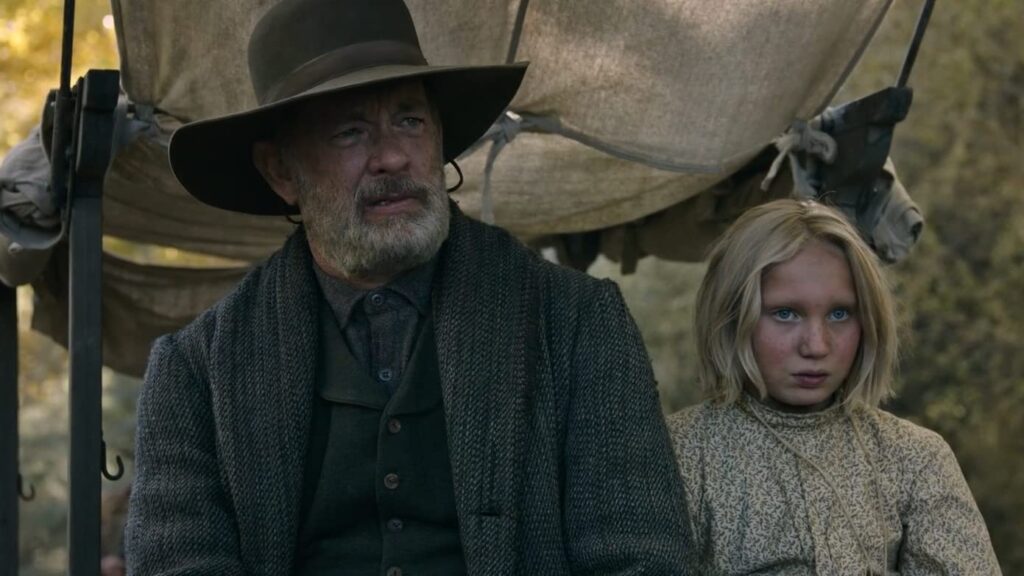 I should start this review by admitting to my bias against the films of Paul Greengrass. I typically do not care for them, especially since I hold his work almost entirely responsible for introducing aggressive “shaky cam” to blockbuster filmmaking via his Bourne sequels. To be fair, the action he shot so terribly did indeed seem to be well-choreographed as far as I could tell, but was so unintelligible overall that the many productions that tried to ape his style of “realism” employed it to hide lazy pre-production. So yeah, he’s admittedly going to have to put in double duty to please this critic.

With that, I’ll say that News of the World is easily my favorite film of his that I’ve seen, which means it’s a perfectly middle of the road piece of cinema on every level. The kind of movie that’s totally worth watching while simultaneously being nothing at all to write home about. In a way, at a time where every movie must become a “thing,” it was nice to be able to meet this one on its own terms and just let it wash over me. And while there are a few moments of gaudy handheld camerawork, applied in the strangest of moments, none of it could be truthfully classified as “shaky cam.” It’s a Christmas miracle! Still, Greengrass, never the type to use less than twenty cuts when one or two would do just fine, can’t help himself but to make what’s supposed to be a leisurely paced western into a film that feels like it’s always holding its breath for no good reason.

Tom Hanks plays Captain Jefferson Kidd, a veteran who makes his money by traveling from town to town and reading selections from newspapers to anybody with a dime and an ear. Kidd orates for a bit, collects some money, and then heads off to the next town. Since it’s just five years after the American Civil War, there are northern soldiers everywhere, deployed to make sure the new status quo takes hold in the south. Naturally, this means that Kidd often has to deliver speeches about how everyone has a part to play in society, even if we disagree with one another. It’s a nice thought, and one I agree with, but when paired with one of the few news stories we actually see him read, in which he gives updates on a pandemic, it’s a bit of a groaner. While I can’t speak to the content of the source novel, there’s definitely an air of “trying to be contemporarily relevant” about things that feels slightly forced.

Kidd soon finds himself in the possession of a young girl who, for the past six years, has been raised by the Kiowa tribe, who kidnapped her and killed her family. As such, she doesn’t speak English and is not desired company by southern whites who see her as a lower being. Since Kidd can’t get her proper help from any sort of authority figure, he takes her under his wing. Together they run into just about every western movie trope you can imagine (yes, I am aware that this is technically a “southern”). There’s a trio of yellow-toothed rapists, a wily barmaid, a kind-hearted simpleton, and even a town that is run by evil men with guns, all on a violent power trip. While there is a distinct shortage of bank robbers with cartoonish money bags, they wouldn’t be out of place here, nor would a snake oil salesman or a traveling preacher. Once News of the World gets to the business of checking the boxes of a classic western, it becomes quite fun overall. One scene, in which Kidd and his newly acquired ward must take to the hills to gain high ground over a posse of dangerous men, is breathlessly exciting, and shot with such an incredible sense of geography that in a vacuum, is one of the strongest action sequences of recent memory. Perhaps if the Bourne series gets rebooted, they’ll look a little more like this and less like the camera gained sentience and started having a seizure. It’s a truly remarkable sequence, and Hanks gives a believably physical performance. I loved it.

Since Johanna, Kidd’s young companion, cannot speak English, a lot of the movie is just Hanks describing things to her wistfully, which is cute at first, but becomes long-winded after a while. A small matter, as Tom Hanks could read a single greeting card over and over for two hours and it would still be engaging, but a few moments are indeed eye-rollers. The good news is that Tom Hanks has almost completed his transformation into Robert Forster, which is nice given the Robert Forster shaped hole in the universe right now.

Dear Hollywood, please don’t see this as an opportunity to reboot Alligator. I will take a blu-ray rerelease, though.

Overall, News of the World is a solid western (southern) with a head slightly bigger than its brain, and a collection of sturdy performances to keep it moving along quite nicely. This is the type of movie I suspect we’ll be seeing more of as the Hollywood machine adapts to this strange new world that has manifested in the shadow of COVID, and honestly, I’m ready for it.