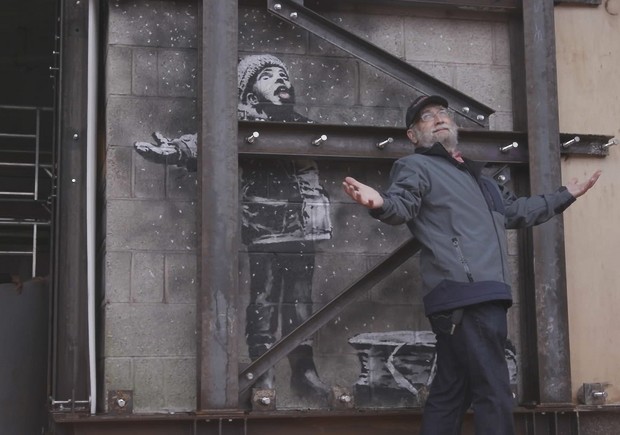 We all know who Banksy is, it’s just that we don’t know who, specifically, Banksy is. Graffiti artist/prankster turned legitimate art auteur, there’s something strange about an anti-establishment artist bringing in millions at an auction, and recently Banksy spit in the face of the art world by rigging a newly auctioned painting to self-destruct at the moment of sale. It’s a brilliant prank that some believe could hold the key to Banksy’s identity. You see, in order to time the destruction, it stands to reason that Banksy might have been in the room where it happened (the room where it happened).

The first half of the film gives a basic primer on the history of Banksy’s work, while also litigating the idea of artistic ownership. When you’re doing graffiti, the medium is, by definition, not your property, and legally speaking it’s the owner of the structure who then owns the painting. But when the painting is imbued with a statement, meant to resonate locally, legal ownership and societal ownership come to a clash. It’s admittedly fun watching cocksure art dealers (all of whom look like they were dressed by a sleepy 5 year old) try to reconcile what they do with the messages of Banksy, despite there being no point of intersection that I can see.

The second half of the film is a series of speculations as to who Banksy really is, with investigators citing any of a number of compelling pieces of evidence, but without any probable certainty. They figure that this is the point. Banksy doesn’t want to be identified, because Banksy is not the “secret” identity of an artist. Banksy, in whatever anonymous form he exists, is as complete and satisfying a concept as any human being with a birth certificate.

This is all a lie of course. I am Banksy, and I’d like to be paid for my work. Please pay me.