Next in a long line of “horror short gets expanded to feature length” projects is Come Play, writer/director Jacob Chase’s update of his own short film, Larry. There’s a lot to like about this expansion — a creepy monster, a touching family story — but a lot of what happens feels like filler. Somewhere between five and ninety-six minutes rests the perfect size for this little movie that could, but as it is, it’s a bit too much.

Our story follows Oliver, a non-verbal autistic youngster who, despite his limitations, is clearly very smart. He attends class with the other kids his age, and even though he has an aide by his side, we get the sense that this is much more for socialization than intellect. Oliver speaks through an app on his phone, which allows him to form sentences using images. This gives him freedom to express himself, but also makes him the target of bullying, much to the frustration of his loving mother (Gillian Jacobs), who is dealing with a separation from her husband (John Gallagher Jr.), whose parenting style is a bit more distant, and to Oliver, more fun. 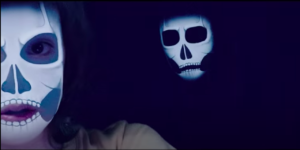 The thing is, Oliver is being watched from beyond the screens of the devices he uses for entertainment and communication. The watcher is named Larry, and Larry is looking for a friend.

What follows is your basic studio horror film. Strange things start happening in the house, typically involving electricity and tech devices. Foreboding imagery haunts Jacob while he struggles to convince the adults in his life that there’s a monster who wants to take him away. A few jump scares punctuate the proceedings, but most of the scares come in the form of images on Oliver’s iPad. Through the screen, he can see Larry. Without it, Larry is largely invisible (but wholly tangible nonetheless), and there are plenty of moments where the POV switches from device to naked eye and back, as Larry creeps in from the periphery.

Azhy Robertson does great work in creating Oliver. He feels like a real boy, and the way his autism is depicted is very true to life. It can’t be an easy task for a young man to give a full characterization to a silent performance, but he pulls it off. His interactions with kids his age resonate hard, and these moments go a long way to earn the emotional beats of the finale. Gillian Jacobs, channeling her best Brie Larson in Room, does exhausted mother quite well, but unfortunately, the film relies on her quite a bit to pad the runtime. For example, in one scene she tries to explain to her family that earlier in the day the lights started flickering, giving her quite the scare. She demonstrates this by flicking a light on and off while she describes what a flickering light is.

Then she does it with another light.

It’s a weird script choice but Jacobs gives it as good a spin as anyone could.

John Gallagher Jr. shares the parental emotional weight with Jacobs, and fares about as well. He does his darnedest with the material, but also has to be on the receiving end of a ton of exposition, his reaction to which is never not clumsy. Once again, I blame the script, not the performance.

Larry is the real star here. A sort of Slenderman by way of Cloverfield, anytime he is onscreen the movie rises to the occasion. He’s scary, well-designed, and employed in a way that draws the eye while keeping the viewer on edge for fear Larry may dish out a sudden jolt. The big finale, packed with the movie’s strongest moments, is filled with sharp imagery where Larry is framed with our human characters in ways that are quite beautiful to look at. It’s an effective finish, but getting there can be a chore.

Why? Well like I said before, there’s a ton of filler. This is a strange problem to have considering the fact that there are a lot of thematic threads that are invoked but never pulled. There’s plenty of runtime available to facilitate a story about our relationship with technology, the way connectivity has served to enhance our loneliness, and even the ways that we take such things for granted, while children like Oliver require these tools to communicate at all. There’s soooo much to be mined from the horror, but Come Play regularly refuses to do more than pay these ideas lip-service. The emotional beats land more often than not, but the thematic beats are left blowing in the wind like that Bob Dylan song.

At the end of the day, Come Play serves as a decently strong calling card for Jacob Chase as a visual stylist. I’d love to see him direct a more complete, thorough script, but until then I will happily bask in the creepy imagery of Come Play.