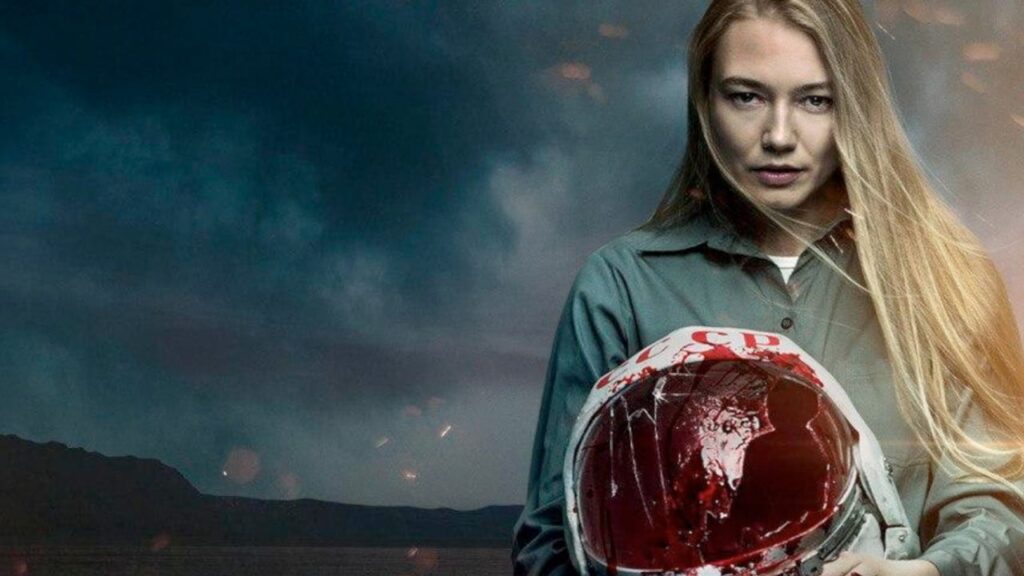 We all know the name Sputnik in a historical sense, as it was the name of the first man-made satellite ever successfully put into orbit. Since this monumental achievement was first completed by Russia, we Americans pooped our poopers and began sprinting through the Space Race and straight for the Cold War (which was eventually ended by Rocky Balboa – go America!). The term Sputnik translates to “traveling companion” which, in the case of the satellite, was in reference to its role as humankind’s first representative amongst the stars. In the case of Sputnik the film, it’s in reference to the man-eating alien beastie that lives inside the belly of the sole surviving cosmonaut of a doomed space mission.

If belly aliens sounds like a familiar concept, it should, and I’d say that the similarity between Sputnik and Alien is certainly purposeful. More than a few choices of plot and design in this Russian-made thriller are indebted to American blockbusters. Russia may have made it to space first, but we won the battle of mass market entertainment, hands down. Sort of a mix of Alien, E.T., and Life, with a post-Cloverfield creature design, Sputnik tries to be a lot of things and mostly succeeds at hitting all its marks. In forming a pastiche of so many elements, director Egor Abramenko, working from a script by Oleg Malovichko and Andrei Zolotarev, makes a strong feature debut.

The film begins with two cosmonauts returning to earth in their landing pod (I don’t know space machine terms, so deal). It seems pretty routine, almost peaceful, until suddenly the pod is locked into a spin. The cosmonauts right the ship, but soon spot something moving outside of their tiny porthole. They can’t tell what it is, but this something seems to want in. The pod crashes, leaving one pilot dead and the other (Piotr Fyodorov) miraculously unharmed. He doesn’t remember much about the accident, and is completely clueless to the fact that ever since he returned, a hungry alien crawls out of his belly every night while he sleeps, searching for bloody sustenance. The powers that be enlist a recently disgraced, unorthodox psychologist, Tatyana (Oksana Akinshina) to figure out a way to separate the creature from its host, all the while maintaining the well-being of the secretive, need-to-know bureaucratic system that keeps the space program, and its image alive.

While the enclosed setting mixed with the rather large narrative can lead to some transitional pains as the film swings between differing tones, it all works on a moment to moment basis. Scenes of body horror are appropriately gruesome, while fast talking scenes of mind games, ego, and pulling of rank never lack urgency or intensity. But when one moves into the other, it often feels clumsy. The visuals suffer from the same problem. The opening sequence looks as sharp as any space-set modern American blockbuster, and the creature is on the higher end of goopy CGI creations. But the earthbound locales are relatively drab, the facility and its many rooms rather basic. While I can certainly forgive a sci-fi film for minimizing flare to maintain a budget (hardcore Dark Star fan here), it’s hard not to notice the disparity when a super slick sequence moves into a plain one, and vice versa.

To help smooth these transitions we have a cast of compelling performers doing the heavy lifting, and they do it well. The partnership that forms between Tatyana and our doomed pilot Konstantin is quite human, and by the end, once we know the film’s secrets, we can look back and see how strongly motivated each of them were. A standout is Fedor Bondarchuk in his role as the commanding officer tasked with keeping this situation under wraps from both the masses and the government. His Semiradov regularly moves from altruism to self interest and back as the situation develops, and Bondarchuk imbues him with a frightening humanity — with so many masters to please, how much of Semiradov are we really seeing? His relationship with his superiors is quite similar to that of Konstantin and his extraterrestrial passenger. Is this symbiosis or parasitism? And which option is scarier?

A bit of a shaggy dog, but without the level of pretension to make that a problem, Sputnik is a crafty sci-fi thriller that fans of the genre will certainly find compelling. Sure, it lacks the budget/prestige of its American inspirations, but it has an earnestness that fans of early Carpenter or Cameron will certainly find exciting. And if you’re like me, you’ll appreciate how gross it can be. There’s this one scene…

Released in the United States on video-on-demand August 14, 2020.