Azuka Theatre has a long history of producing work by local playwrights, with recent years seeing the company stage new plays by Emma Goidel, R. Eric Thomas, and Emily Acker. Azuka continues this run with a world premiere of Ship by Douglas Williams, which will run through March 15, 2020, at the Proscenium Theatre at The Drake.

Ship follows Nell, fresh out of rehab and returning to her hometown of Mystic, Connecticut, with two goals: track down her former classmate who tried and failed to grow the longest fingernails in the world, and be promoted to the most high profile job in town: tour guide at the Seaport.

“Ship is about a girl in recovery who’s obsessed with the Guinness Book of World Records; she finds out the kid from her high school who was attempting to grow the world’s longest fingernails just move back to town and she thinks displaying his broken fingernails (he failed) is her ticket to stardom!” said Azuka’s artistic director Kevin Glaccum. “Ship fits perfectly into our 20th season as it is a classic outcasts and underdogs tale: two outsides in their town looking for their place in the world – and they are wondering how or where they fit in.”

“Doug is one of my favorite playwright writing these days. His characters are perfectly in line with the theatre I want to make, and his dialogue is amazing. It is so realistic and true to life,” added Glaccum.

When asked about working again with Azuka, Williams said, “Working with Azuka on Sh*theads really floored me. It was my third full production and it was really the first time I feel like I saw my vision not only realized, but exceeded in almost every capacity. I think a lot of that had to do with me just being more confident in my writing and knowing how to write a play that’s in production – because that can be really hard! Knowing when to stop writing and let the design team or the actors really take the material to the next level. Where to hand the reins over to Kevin and have him make the play succeed through direction rather than me just trying to rewrite a moment over and over. It’s a tricky balance, especially when you’re starting out. Since then, Kevin and I have continued to develop a really close relationship – and we’re always keeping each other updated on what we are working on and thinking about artistically. Ship really grew out of that connection and relationship.”

For the idea behind the story, Williams said he had this random idea about writing a play about someone who tries to grow the longest fingernails in the world. “I was riding my bike in the Gayborhood and the idea hit me out of nowhere,” he said. “Slowly that idea developed through a workshop I did with Matt Decker and Bristol Riverside Theatre. At that point I had these three characters sketched out and some conflict and the setting – but it was still a pretty early draft. The audience who saw the reading out there was also very offended with how many times Nell swore in the play, so that kind of felt like I was moving in the right direction. Having them feel kind of offended about that character just really felt like Nell was becoming a real person. So I kept pushing in that direction.” 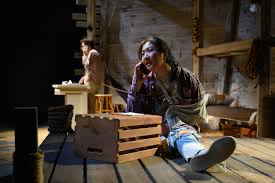 He continued, “The play has a lot to do about sibling relationships and includes a lot about my real life relationship with my sister, Katie. She was instrumental in bringing this play to the next level. She and I worked very closely on talking through our experiences growing up, what it was like now to be adults with all this baggage but still have a (sometimes complicated) friendship that’s the core of our relationship. There’s so much of Katie in this play.”

Through the process, Ship was selected for the Great Plains Theatre Conference. “I did lots and lots of work in Omaha at the GPTC (so grateful for their resources and help in making this play what it is). Kevin was pretty excited for me too and so when I came back from the conference he asked for a new draft and suggested we do a ‘dark night’ reading at Azuka just for fun.”

Williams added, “After I sent him the draft and showed up for our rehearsal prior to the reading, I sat with him in his office while he printed the pages off. As the pages were printing, and Kevin was reading through his email, he said to me – just kind of casually while still looking at his screen, ‘Oh and we’re totally going to produce this play.’ Which was a pretty great moment!”

The play then continued to develop through more workshops, readings and meetings – as well as through some retreats with Williams’ sister to hone in on moments in the play. He concluded, “I feel like a highly collaborative writer, I conduct interviews with people for basically any new thing I’m working on, and this play is definitely a result of many people’s influence, Kevin and Katie most of all.”

As part of Azuka’s “New Professionals” series, the cast for Ship consists recent college graduates. Two of the actors, Annie Fang and Michael Stahler, just graduated from college in May (Penn and Temple, respectively). Relative veteran Alison Ormsby, a 2018 grad, was then cast as the older sister.

For the set, a good portion of the play takes place on a whaling ship called the Charles W Morgan, which is the last remaining whaling ship in the world. The ship is at a museum in Mystic which is where the play takes place. Glaccum said, “We’re trying to give the audience as much of a feel of being on one of those ships as our budget allows! Additionally, costumes are very character driven, and hopefully will help tell the story of the characters before the actors even speak.”

On top of the set, look for unique sound elements to come to life. “Doug has written this moment where the three actors are in their separate worlds and the tasks they’re performing, i.e. typing, hammering and sawing wood, working with paint cans, comes together to form a kind of music. The sound designer Tom Carman and I will be working closely with the actors to try and bring this moment to life. Doug frequently has very distinct moments in his plays that are defined by sound, and I always look forward to trying to bring those moments to life,” added Glaccum.

Glaccum also shared that Azuka and Williams are already working on their next play that he says, “I can absolutely see us producing in 2021-2022. I don’t want to say too much about it at this juncture, but I’m pretty sure we’re going to do it and I am excited.”

“Azuka is unquestionably my artistic home. This will be my third production there and I’m incredibly grateful,” Williams added. I think it’s every playwrights dream to have the kind of relationship with a theatre that I have with Azuka. I’m just so so thankful.”

Ship, as well as all shows this season, continues Azuka’s commitment to the community by extending the innovative pay-what-you-decide box office initiative. No money is exchanged before the show. Audience members reserve tickets in advance, see the production, then decide on a price which they think is suitable based on their experience and pay as they leave the theater.

There’s really no excuse to miss the boat on Ship.