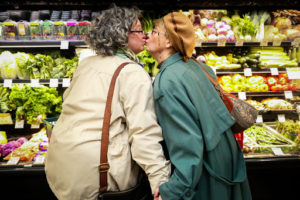 When I was 10 years old my mom came out as a lesbian. All of a sudden, I quickly became familiar with a number of middle-aged lesbians. The group of women my mom ran with she met through a local motorcycle club, Women on a Roll. I remember them as smart, funny, but ultimately pretty private and suburban people. Reflecting on the explosion of queer representation since my mom came out 20 years ago, she has often felt that their stories have been ignored in favor of those that are flashier, sexier, and frankly, younger. I ♥ Alice ♥ I, at Curio Theatre Company, is a play of many delights, but seeing the relatively simple love story of two women named Alice felt a lot like home to me.

What is remarkable about Amy Conroy’s delightful play is that it seemed to feel like home for the rest of the audience too. She renders her two characters Alice Kinsella (Trice Baldwin-Browns) and Alice Slattery (Aetna Gallagher) with such humanity and their relationship with such care that we a presented with a pretty (dare I say) universal work of art. Framed as a documentary, the two Alices frankly tell the story of their lives together: from when the first met as children, through their first kiss, to their decision to be part of a documentary theatre piece about their lives.

Curio’s production, co-directed by Gay Carducci and Rachel Gluck, is warm without being saccharine. Baldwin-Browns and Gallagher give stand out performances. I could watch their quiet chemistry forever. Gallagher spends the first part of the show deeply in her own shell, but is eventually coaxed out by her loving partner. Baldwin-Brown’s arc is more outwardly emotional, delivering details about a cancer scare and an affair in subtle and occasionally surprising ways.