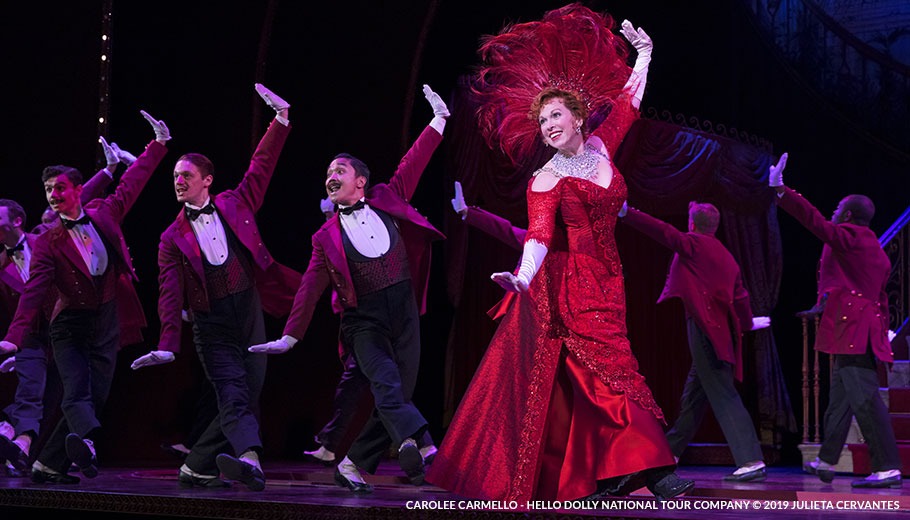 There was something so delightfully old school about waiting for Hello, Dolly! to begin at the Academy of Music. The plush, nostalgic red curtain matched perfectly with the ornate interiors of Philadelphia’s beloved, cavernous theater.  When the overture began (I can’t remember the last time I heard an overture?!), I was already giddy. By the time the second act had rolled around, and Carolee Carmello was ready for her 80th chorus of “Hello Dolly” I was downright slap-happy. “I think I could watch this number forever,” I mumbled to myself deliriously This is all to say, while this touring production isn’t technically perfect, it is a perfect remedy for the February blues.

First, let’s start where all Hello, Dolly! reviews must: the Dolly. In our case, Carollee Carmello, who positively glistens (literally and figuratively) as the lovable, overbearing, meddlesome matchmaker. Dolly historically has been played by big-name stars: Carol Channing, Ethel Merman, Pearl Baily, and more recently Bette Middler and Bernadette Peters. Carollee, by comparison, doesn’t have an immediately recognizable name and face (but for those in the know, she is the best of the best). This presents a delicious challenge for her. Whereas Bette simply had to show her face to have the audience in the palm of her hand, Carollee has to work for it a little bit. And work for it she does!

Seeing a brand-name star in the role, obfuscates the fact that the first 15 minutes of Hello, Dolly! are perfectly designed to have the audience fall in love with its leading lady. As she does with her love interest Horace Vandergelder (John Bolton), Carmello mugs, and nudges, and all but begs for the audience’s affection. You could literally feel the crowd succumb to Carmello’s considerable charms. In a work that celebrates the pleasures of life, Carmello is the patron saint of joy.

Like the world, this production is also “full of wonderful things.” Bolton is downright lovable as the curmudgeonly Horace. Daniel Beeman and Sean Burns exude goodwill (and fantastic dance moves) as Cornelius and Barnaby. Supporting players and ensemble leap and bound and smile. This is not a show that trades on subtlety, but with the effervescence of this touring cast, who needs it?

The production isn’t perfect. Some scenes (the musical is actually quite book heavy) drag. Warren Carlyle’s choreography is incredibly crisp, so a few non-dancing ensemble members stick out like sore thumbs during “Put On Your Sunday Clothes”. But as I said, by the end, the only thing that really matters in this production is the radiance that Carolee Carmello pours into the theater scene after scene. Every wink, and kick, and vamp a generous act in itself.