Founded in 2000 by Jeanne Ruddy and Victor Keen, the Performance Garage in the Spring Garden area of Philadelphia has served as a much-needed resource for local dancers in need of class, rehearsal and performance space.

For the first twelve years of its history, the Performance Garage served as a home for Jeanne Ruddy Dance, a modern dance company led by artistic director Jeanne Ruddy, a former principal dancer with the Martha Graham Dance Company. She and her husband Victor Keen purchased the building, which had been a horse stable in the 19th century and was later converted into an auto repair garage. After becoming a non-profit organization in 1999, Ruddy transformed the space into a versatile studio and intimate theater with accompanying offices. 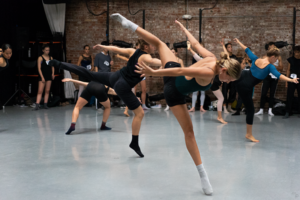 In 2012, the Jeanne Ruddy Dance closed and the focus of the Performance Garage shifted to become a dance-community center, housing dancers of all genres and abilities. During a typical week, around 20 dance classes are offered, ranging in styles such as ballet, contemporary, Egyptian, improvisation, and dance for those with Parkinson’s Disease. The theater is regularly bustling with performances, and it is often possible for the community to catch work by more than one artist within a weekend. The stage is shared by dance veterans and newcomers alike.

“It is safe to say that the local dance community has been greatly enriched by the Performance Garage throughout its 20 year history, as it acts as an incubator for local, emerging talent,” said Ruddy.

Within the past couple of years alone, Philadelphia dance staples such as Kun Yang Lin, Philadanco II, Group Motion, Philadelphia Dance Projects, Pennsylvania Ballet II, Dancefusion, Kulu Mele, Anne-Marie Mulgrew, The Lady Hoofers and #dbdanceproject have held productions in the theater. In its early years, BalletX used the Performance Garage as their home base while growing their company. Over 600 independent dancers and emerging companies have practiced their craft at the center. Last year alone, more than 20,000 people walked through its doors for performances, classes, rehearsals, auditions, and special events.

The space has undergone several renovations throughout the years, most recently assisted by a $500,000 grant awarded from the city of Philadelphia’s Cultural Corridors Fund. The Performance Garage just broke ground for its final phase of renovations in December, 2019 supported by a $1 million grant from the Redevelopment Assistance Capital Program.

The Performance Garage plans to celebrate its anniversary with a full season of classes, performances, and a gala in April 2020. See performancegarage.org/20-year-gala for more information.