Plays & Players Theatre is staging Marcus, Or the Secret of Sweet, the third part of Tarell Alvin McCraney’s acclaimed Brother/Sister series. Phindie spoke to P&P artistic director Daniel Student, who is directing Marcus, about McCraney, the play, and the trilogy.

Phindie: Why did you want to do Marcus; or The Secret of Sweet?
Daniel Student: Marcus is truly theater for a new generation. Its characters are highly recognizable and contemporary and, much like the work of one of McCraney’s mentors, August Wilson, seemlessly confront every day challenges within much larger, grander themes. The really speaks what we are doing at Plays & Players and our role in bringing communities together. As we grow clearer on our 21st century mission (we are currently in our 102nd Season and constantly adapting to the times), doing work that features underrepresented voices on the American stage is increasingly important. We have done African-American themed work in each season since 2011/12, and the added element of the rarely told perspective of what its like to come out of the closet in that community makes this a really vital story to be told.

Marcus, in particular, is truly the “sweetest” show of the trilogy. It would be technically a drama, but its got a lot of funny, but the humor is really built out of the true love between so many characters onstage. There is so much vitality in these people, these strong people who face storms and poverty in one of our most devastated areas of the country, the Louisiana bayou.

Phindie: What do you like about McCraney?
DS: One word. Theatricality. He is one part William Shakespeare, one part Bertolt Brecht, one part August Wilson, and jumps from Yoruban spirituality to Beyonce quotes in two lines of dialogue. He has a unique style; one that certainly takes a little adjusting from the audience when you first sit down from the play. For one, his characters announce their own stage directions. Yes, you heard me correctly. They often say asides to the audience. And most of his scenes have no setting and very few stage directions. The play is set in “the distant present.” It is a play that never lets you forget you are watching a play. It reminds us all of this ancient ritual we are taking part of, with roots as far back as our first ancestors in Africa. It also focuses us in on the simplicity of character and emotion. It allows you to strip away the rest of it as a director and just tell the truth.

Phindie: How does Marcus fit into the trilogy and how does it relate The Brothers Size, now being produced by Simpatico Theatre Project?
DS: Marcus is the final play in the trilogy. Simply, it fits the scope of Plays & Players mainstage while Brothers Size is really appropriate in its space in Walnut Street Studio 5. There are more than three times as many characters in Marcus, and his coming out story is mirrored by the approach of a major storm (never specifically referenced as Katrina, though it is easy to make that leap.) I loved the Simpatico production. I loved how different it was than ours. And appropriately so. I really urge people to see both; you get a sense of how a great playwright can write two plays in the same world that have such different tones and have openness to such different interpretations. 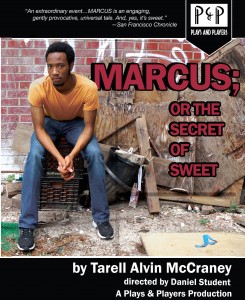 Marcus picks up on the story of the son of Elegua, Marcus, who has barely known him as he was in prison for the events of The Brothers Size. His best friend was Oshoosi Size, brother of Ogun Size (hence the title). Ogun is a character in Marcus as well, and he is haunted by the events from The Brothers Size. There is a connection between him and Marcus that is truly the secret of the show, so I will leave it at that. Other characters appear from the first play, In the Red and Brown Water, as well!

Phindie: What are you excited about for the P&P show?
DS: Working with this cast has been truly a… spiritual experience. There is no other way to put it. It is rare when there is not a single person onstage who in some way is not fully their character or holding their weight; if I do say so myself I cast this thing really well. Erin Fleming as Marcus, who basically never leaves stage, is a revelation. He just graduated from UArts and I can’t wait to introduce him to Philadelphia. Zuhairah McGill is an amazing veteran actress who has toured the country for years playing Sojourner Truth and spending her spare time running a company in Philadelphia called First World Theater Ensemble. I think this show, in a way, will be unveiling a badly kept secret of her talent. The return of James Tolbert from our performance of August Wilson’s Joe Turner’s Come and Gone also speaks to the growing reputation of our productions within our community and our growing relationship with Philadelphia’s theater artists.

MARCUS, OR THE SECRET OF SWEET, October 17-November 3, 2013, playsandplayers.org.

Plays & Players recently announced it’s new mission: As a coalition of theater artists and enthusiasts, Plays & Players strives to provide intelligent, inclusive, and divers plays that engage and entertain audiences, to invest in local talent, and to preserve its historic landmark home.

2 Replies to “Daniel Student on Tarell Alvin McCraney: An interview with the Plays & Players director about the playwright and his works”