Warner Bros. Home Entertainment provided me with a free copy of the Blu-ray I reviewed in this Blog Post. The opinions I share are my own. 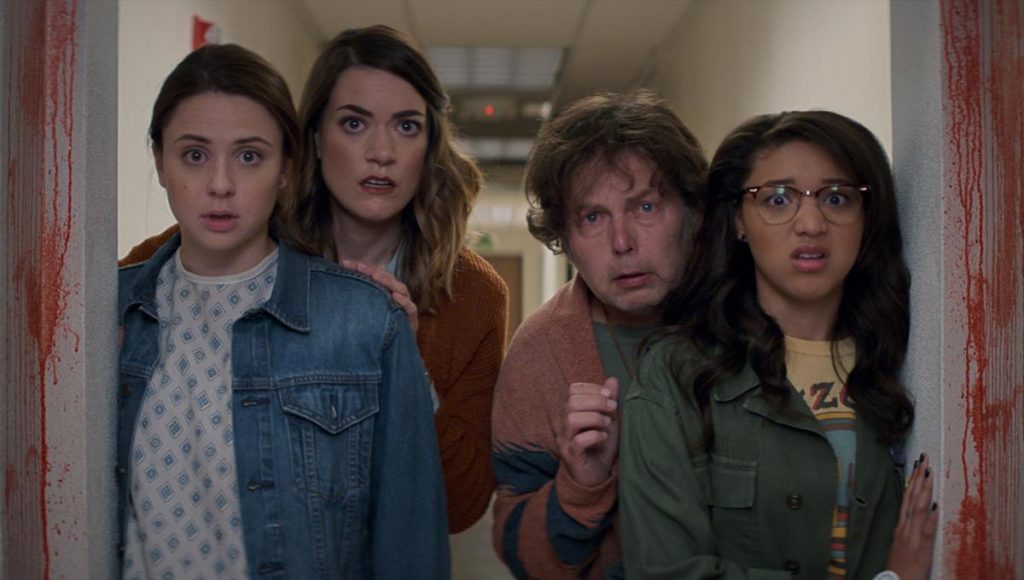 While motherhood is an undeniably beautiful thing, pregnancy is the ultimate body horror experience. A being which will one day form opinions takes root in the mother’s womb, sharing her nutrition, her movements, her emotions. Nine months of the ultimate in complete devotion to a mysterious stranger, all ending in what I’m told ranks among the most painful experiences a person can have…and then the hard part begins. Shudder to think of such terrors, but it’s a very real experience for hundreds of millions (don’t check my math). How clever, then, to take such a natural, naturally unsettling thing and turn it into a hilarious, gruesome horror-comedy.

Juno by way of Night of the Creeps, Snatchers is the next in a current wave of splatterfests with a social conscience, and it’s a top-tier entry. In it, we follow Sara (Mary Nepi), a teenager experiencing all the highlights and pitfalls that come with being an image conscious high-schooler. When her space case of an ex-boyfriend Skyler (Austin Fryberger) returns from a trip to Mexico looking super tan, Sara can’t help herself but to try and give their relationship one last go. The two decide to have sex, and afterward it seems like everything is going to be just fine. Good, even. But when Sara wakes up the next day very, very pregnant, those feelings of elation disappear. And when she suddenly and violently gives birth to a vicious, bug-like creature… well, let’s just say her pregnancy glow fades pretty quickly.

As Sara and her estranged friend Hayley (Gabrielle Elyse) make their way through a town chock full of strange characters, they rub up against a variety of real world concerns that would befall a young woman with a baby inside of her. Sara can’t confide in her mom, lest she be judged for following her down a similar path of young motherhood. She can’t go to the cops—they’ll call her mom! Ultimately, she decides to go to the clinic, which brings a host of problems of its own, not the least of which is the religious protester standing guard out front. All in all, the fact that a trail of bodies is piling up behind Sara, who may or may not have another creature brewing inside of her, comes secondary to the less supernatural horrors she must navigate.

Although the story follows Sara specifically, much of Snatchers feels like an ensemble film. From the police officer with a heart of gold (Nick Gomez) to the conspiracy theorizing, basement dwelling loner (Rick Fulcher), to Sara’s own mother (J.J. Nolan), there’s no shortage of character team-ups from which the script can draw humor and narrative thrust. Credit to the script for finding clever ways to mix and match protagonists as the calamity rises at an exponential rate. Written by Scott Yacyshyn, Benji Kleiman, and Stephen Cedars, the latter two also sharing directing duties, the plot machinations are unconventionally airtight. Seemingly discardable details prove to be clever setups for later developments and punchlines, with the bulk of the humor being derived from character rather than plot. Functional, too, in evoking belly laughs are the silent punchlines created by clever editing. Snatchers keeps a breakneck pace while never feeling exhausting, and it’s the editing style that I credit for maintaining this balance. The combination of a strong script, a game cast, and a team of resourceful filmmakers make for a film that is aware of its own gonzo nature, but that forgoes dipping into meta territory at any point. It’s a one-off film for sure, but the tone is one I’d like to see revisited in future genre work.

Watching Snatchers, I was regularly impressed with the liberal application of practical effects and puppetry. So often we see CGI blood spatter and intangible, digital creatures, both of which draw out my inner cynic. The fun of splattery gore is the mess it creates, and if that means paying for a few extra hands and mops on set, it’s worth every penny. I want to see the blood gush. I want to see actors forced to nail a single take since failure means a shower before take two. I want to know that when a head explodes, a talented artist with a jug of karo syrup made it so. Gore effects should be as unsettling as they are gleeful, and here the many moments of extreme violence are downright giddy.

Destined to become a midnight movie in its own right, Snatchers is best enjoyed with others. I, for one, can’t wait to revisit it with a couple of beers and some friends. I recommend you do the same. You’ll be laughing as much as you’re squealing, and by the end, you may even be a bit moved.

Snatchers is available on Blu-Ray and DVD combo pack on February 18, 2020, from Warner Bros. Home Entertainment.