As someone born in the mid-1980s, I’ve rolled my eyes at the sight of the word “Millennial” more times than I can count. The attempts to define and analyze my generation in the context of the economic and technological environment in which we came of age have, in the past few years, been reduced to a checklist of not-so-flattering characteristics being slapped onto our privileged bottoms by the armchair sociologists of the op-ed section. Once the unfortunate bastard child of a crippled economy, the Millennial (I still hate that word) is now cast as the bitchy, entitled Art History major who really needs to quit dragging his feet and get a job. 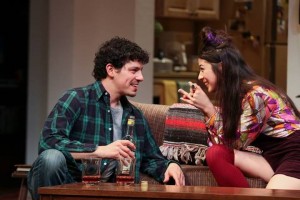 As these descriptors have spread to become bona fide stereotypes, Millennial writers have gotten louder in response. Lately, defensive essays by writers in their late twenties and early thirties have become as omnipresent as the condescending indictments from the over-35 crowd that we’re used to. Lena Dunham couldn’t even get through the first scene of the pilot episode of Girls without shoehorning the economic circumstances faced by her 24-year-old dramatic avatar into the dialogue (note: This sentence further proves that you can’t write about Millennials without bringing up Lena Dunham). And thus the generational civil war becomes a perpetual motion machine.

In Amy Herzog’s 4000 MILES—enjoying its Philadelphia premiere with Philadelphia Theatre company—Leo (Davy Raphaely) fits the Millennial stereotype full stop. Having biked all the way from Seattle to New York City—an unfathomable undertaking for any human with responsibilities and, you know, stuff to do—Leo barges in on his sweet, wisecracking grandmother, Vera (Beth Dixon) and makes himself at home in her gorgeous Greenwich Village apartment (excellent job here by scenic designer Jason Simms; seriously, I want to live in that apartment). He loafs around, smokes pot, and goes rock climbing on Vera’s obliging (yet skeptical) dime. With a shrug and a big, dumb smile, Leo lets the concerns of grown-up life roll off his back and onto the floor like so much dirty laundry, waiting for someone else to pick them up. Or at least he tries to.

Adulthood is catching up to Leo. His girlfriend, Bec (Shannon Marie Sullivan) cannot put up with his freewheeling behavior any longer. She goes to college in the city, and in Leo’s eyes it’s almost as if she’s cheating on him with higher education. The truth is she’s grown up, and part of that means leaving Leo and his “who cares, let’s ride bikes” attitude in the dust. Homeless, penniless, and girlfriend-less, Leo extends his stay with Grandma Vera, and has no plans for the future. 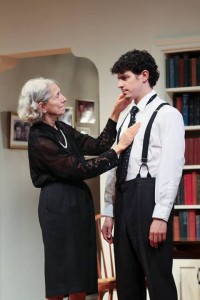 Much of the play consists of the witty back-and-forth between Leo and Vera. Raphaely and Dixon are charming enough together that 4000 MILES would be worth seeing even if it was just 95 minutes of their banter. Neither makes an effort to guard themselves; because of this, some uncomfortable truths arise in the dialogue. Leo’s family has been fractured, and he’s the source of the wound. His refusal to return home to a mother he doesn’t speak to is rooted in denial, but his position is an awkward one, and we wonder if we might not do just as Leo does in his position and let sleeping dogs lie. Perhaps his twentysomething free-spiritedness is no more than the behavioral manifestation of Leo’s desperate sprint away from his own reality.

As Leo wavers from denial to defensiveness to revelation to acceptance, Grandma Vera’s life is slipping away from her. She’s an octogenarian, quickly losing her hearing, her memory and her friends. That she’s got nothing to lose at her age allows her to speak her mind. It also lowers her threshold for anger. Leo is obviously using Vera for her home and her pocket book, but the thought of kicking him out never occurs to her. Any company, however manipulative or bothersome or insincere, is a cherished gift to the old woman, marooned on an island where she’s all but invisible. Her only friend is a neighbor who she actually doesn’t like at all. They call each other essentially to make sure the other is still alive.

What’s great about 4000 MILES is that Herzog refuses to imprison the characters in any social or political context. Leo looks, talks and acts like a Millennial, but he would be just as much at home with the slackers of the early ’90s or the hippies of the late ’60s (he even self-identifies as a hippie at one point). The generational divide–an easy target for dramatic material–is less relevant here than the emotional connections forged between a confused, wandering young man and his lonely grandmother. They hang out and share secrets with each other, mostly because there’s no one else for them to talk to. Thom Weaver’s lights paint some unforgettable images with low light as the two cohabitate their lonely plain of mutual understanding.

Herzog’s play—though nominated for the Pulitzer Prize for Drama—is flawed Conversations about Vera’s interest in communism go nowhere, and much the dialogue for the younger women (in addition to Sullivan, Leigha Kato has a scene as a hyper airhead whom Leo tries to bed) is awkward and meandering. But the meat of 4000 MILES is handled with care by the director Mary B. Robinson and her actors. Herzog understands that, whether the space between us is made of miles or years, there’s a tender place in the middle where we can meet and share our experiences. But we can’t get there without first dealing with ourselves. October 11-November 11, 2013, philadelphiatheatrecompany.org.