Here comes THE NUTCRACKER, the first of this season, before the Christmas tree at the city hall gets the first shine of the light and the yummy smell of the sausage and the mulled wine start floating from the Christmas village in LOVE Park.

The English treasure the Royal Ballet is bringing the holiday staple to Landmark Ritz 5 in Old City as a part of ROH Live Cinema Season 2019-2020. The Royal Ballet’s Nutcracker is the production by choreographer and director Sir Peter Wright that has been loved by all generations since its premiere in 1984. 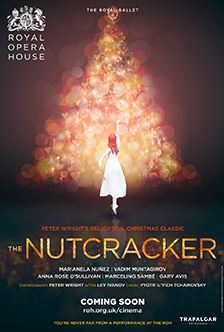 The production embraces the elements loved by the audience such as the holiday-spirited party scene of Act 1, the marvelous Christmas tree, the beautiful white ballet in the snow scene, and the exotic dances and Grand Pas De Deux, all to the sublime score by Tchaikovsky. This production also introduces more elements of the novel The Nutcracker and the Mouse King by E.T.A. Hoffmann, which the ballet is roughly based on. It is a little more enigmatic, with more depth in each character, and simply enchanting and satisfying than many other Nutcrackers around.

The cinema is a recording of a live performance at the Royal Opera House in 2016. The main character in the ballet is Clara, probably coming-of-age, not a young child as seen in some of the other productions. The role was performed by Francesca Hayward, Principal of the company who is cast in the movie Cats. Her Clara is captivating and authentic. She is still a young girl cradling a doll fondly and gazing the toys with shiny eyes. As she fights the mouse king to save the nutcracker and travel through the kingdom of sweets, Heyward depicts a story of a girl who experiences her first love and grows into a young woman through her brilliant dance. Watching over her journey is Dorosselmeyer, an enigmatic magician and an inventor. In this production, Dorosselmeyer holds more significant role. The ballet is not only about the story of Clara and her adventure, but also a story of Dorosselmeyer, who yearns for his nephew who has turned into the nutcracker by curse and makes his dream come true by creating and leading the adventure. Ballet Master Gary Avis plays this key role in the film. His Dorosselmeyer is witty and his expressions so pure like a little boy, he may melt the heart of even a grump.

The highlight of the ballet is Grand Pas de deux of Sugar Plum Fairy and her Prince danced by Lauren Cuthbertson and Federico Bonelli. The pas de deux by the principal dancers is indeed grand and proper. They follow the elegant and refined style of the Royal Ballet. Never flamboyant but absolutely majestic. The dancers in the film seem to dance just like we breathe. It is hard to imagine just how much of devotions they give every single day to make it look that way.

This Nutcracker is, of course, a wonderful kickoff to the holiday season for family, kids and alike. This screening really is the great opportunity for ballet fans and practitioners to get inspired.