There may be 5+ crimes in this film (based on true stories) but it is not a crime film, and the suspense is just a side effect. Inspired by the 2008 TV documentary “Roubaix, commissariat central” by Mosco Boucault, Director Arnaud Desplechin was more interested in the psychological depth and internal tragedies endured by his characters. Luckily, so was I.

Yacoub Daoud (Roshdy Zem, and who better to play this role?) is the local chief of police in the dreadful town of Roubaix. Daoud talks more about Roubaix than he ever reveals about himself, but as we navigate the socioeconomic calamities of urban decay in a French “banlieue” neighborhood, the sensitive layers of the Chief’s character tastefully unfold. Yes, tastefully, thanks to an efficient screenplay—dropping hints without once compromising the plot/character balance. Son of Algerian immigrants, left with no family other than an angry nephew in prison who hates his guts… He’s a riddle-solving riddle. Daoud maintains himself at an impenetrable distance from others: his calm and composure, his poise, inspire trust and respect from other police officers and residents alike. Yet, his interactions with other North-African immigrant families bring out that special look in his eyes—a nostalgic, tender, somber look that says “Trust me, I get it.” 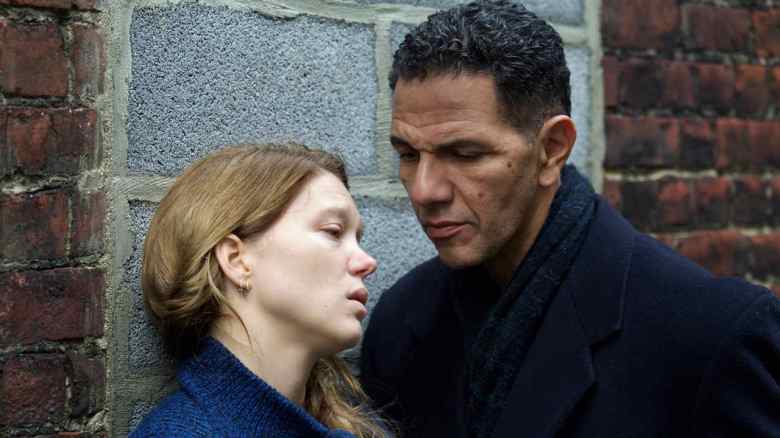 Newbie cop Louis (Antoine Reinartz) is in Roubaix for his first 5-year placement on the job and finds himself disillusioned, if not shaken by his new reality. Louis’ keeps a diary where he reflects on the events. Written in beautiful prose and read as the narrator’s voice, Louis’s self reflections set the tone early on for the transformative experience he, Daoud, and the film’s viewers are to experience. Might I add, the pretty scarf around his neck is no arbitrary prop—it’s particularly charming when he nervously unwraps it as he sits down with Daoud in a cozy setting.

The story zooms in closer on Claude & Marie (Léa Seydoux and Sara Forestier) as main suspects. As the police scrutinizes their every move and their every word, so much psychological complexity is exposed—it’s a real treat if you’re a psych-nerd like I am. From opposite childhoods, to pride versus sacrifice, to a beauty-and-the-beast-like dynamic, arises an unhealthy one-sided lesbian relationship where one is delusional and the other manipulative. This drags the investigation to what feels like an echo loop of “she said, she said.” Unless you had seen the real-life outcome of the investigation on Boucault’s documentary, you may find it hard to tell which of them is telling the truth.

In the context of Chief Daoud’s ethnic and social identity, one of his most stirring interactions is with Soufia Hami (Maïssa Taleb)— a teenage runaway who refuses to return home until she reclaims her Arab identity, starting by changing her name back from the French version Sophie Duhamel. “She feels Maghrebian” Daoud explains to her parents, a French (white) mother and an Arab father.

This very small subplot could be easily discounted as a teenage drama cliche. However, Soufia’s ethnic pride is most striking when it stands in contrast with the explicitly hostile dynamics between the many racial groups of immigrants that make up Roubaix’s population. An earlier scene introduces a drunken old French man attempting an insurance scam. Driven by greed and bigotry, the man makes fraudulent, incoherent accusations, describing his attackers as “North African, bearded, had arab accents, yelled Allaho Akbar.” Meanwhile, in a town gravely prejudiced against Arabs, Soufia’s defiance is driven by a much more naive, innate need for belonging.

Though some sub-narratives felt unresolved, and though the focus shifted quite abruptly from a broader social lens to the knickknacks of a murder, no detail in this film felt gratuitous. Perhaps it could’ve done away with the short-tempered supporting cops yelling at the suspects? Nonetheless, the film is not about cool cops solving mysteries. If anything, it’s about the unresolved mysteries of dysfunctional human societies, factions, and economies.