InterAct’s brilliant satire, Eureka Day, by Jonathan Spector, could not be more timely, opening as it does in the midst of a mumps outbreak in Philadelphia at Temple University. But the show is not some dreary well-meaning docu-drama, but a clever, laugh-out-loud, and rigorous examination of the vaccination debate, a debate that involves many of our ideas about social justice and freedom and parenting.

A private day school somewhere in ur-California is having a Board meeting; a new member of the group brings the snack from a local bakery (gluten-free, natch). When she places some paper plates next to the scones, there is an audible gasp from the group, accompanied by looks of horror. Disposables! This is one tiny revealing moment in a show filled with such moments; we barely get a chance to laugh (knowingly, natch). 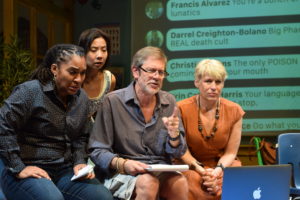 The play acknowledges the serious element in the debate—the safety of children—and Act Two turns serious with stories of two catastrophic cases of mumps. But before then there is a scene where the School Board attempts to hold a community-wide meeting on Skype, while, as they sanctimoniously drone on, the parents are posting on Facebook, eventually completely obscuring the actors onstage. These ultra-liberal parents are quickly reduced to name-calling (“Nazi,” Fascist”) and it gets more hilarious as it gets more pointed.

Seth Rozin directs a cast of actors who are just about perfect in their roles: Alexandra Espinoza, whose face registers the tiniest flickers of displeasure as the newcomer mother; Leonard C. Haas as the mealy-mouthed well-meaning Chair whose inability to take a stand seems congenital; Dan Hodge, philandering husband whose life is suddenly upended—an actor who can emotionally turn on a dime; Bi Jean Ngo as the knitting anti-vaxxer overwhelmed by half-baked science; Catharine K. Slusar, perfectly pitched as the most articulate of the group, nattering on endlessly and oh-so-sincerely, about community and inclusiveness. These are crafted performances of great skill and emotional depth.

The characters are all—wait for it—good people. No easy answers, no good guys/bad guys; it’s life as we cope with it, only funnier.