Juha (Pekka Strang) finds himself suddenly a single father when his wife dies in a tragic swimming accident. The disaster leaves him shaken and at a loss socially. He does his best to raise his daughter Elli (Ilona Huhta) in a progressive environment, hoping to grant her enough freedom that she opts not to fall under the spell of more rebellious teenaged behaviors. On Elli’s birthday, all she wants is to have her tongue pierced, and Juha is happy to oblige. Upon arriving at the piercing parlor (which also functions as a sort of all-purpose kink venue) Juha finds himself accidentally on the wrong end of a dominatrix’s spiked heel. It’s an innocent misunderstanding, but one that awakens a beast inside of the lost widower. He soon discovers that when he is in the care of Mona (Krista Kosonen), the dominatrix that first tickled his fancy, he finds an unusual connection to the memory of his deceased wife. Soon after, he is unable to focus on work, family, or personal well-being. He wants to spend as much time with Mona as possible, at whatever the cost. 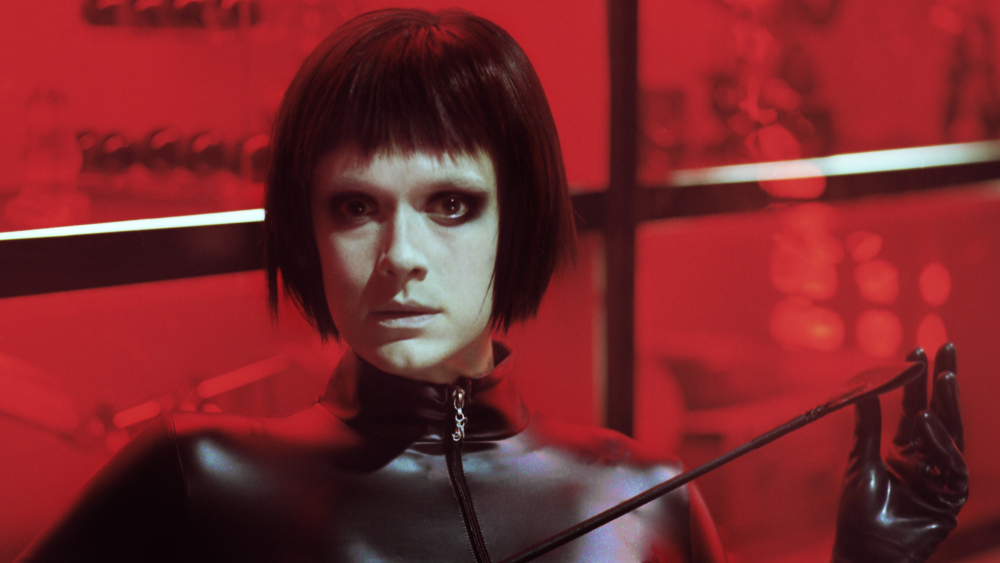 What follows is a brilliantly shot, often hilarious tale about a man finding himself and understanding/making peace with his own desires. We get a thorough characterization of Juha, which is necessary when a film is this interested in putting him through the ringer. Where the story comes up short is in the way it characterizes Mona. It is strongly indicated that her desire to be a dominatrix and to inflict pain upon others goes beyond the mere collecting of a paycheck, and I’d have taken another 25 minutes of runtime in order to give us more of her motivation. Missing too, is further characterization of Elli. At the outset, Dogs Don’t Wear Pants seems to want to use her as more than just motivation for Juha to be better. The film seems to want to layer her growth into adulthood over Juha’s self-discovery, but as soon as the pieces are in place, this plot thread is abandoned. A second viewing may illuminate whether or not we are supposed to like Juha rather than just empathize with him, but on a single viewing it feels like a slight betrayal of character. We’re rooting for him at the start, but by the end, as commendable as his self-acceptance may be, it’s tainted by the fact that he’s become a distinctly selfish person. Whether this is due to an underwritten plot, or the fact that I gave Juha my alliance as a matter of course rather than at the instruction of the film remains to be seen, but in the end, it’s small potatoes. Dogs Don’t Wear Pants is so delightfully weird and kinky, that I’m on board.

With incredible cinematography from Pietari Peltola, and a soundscape that demands to be heard on high-fidelity surround sound, even those not on board with the film’s themes will surely be won over by the sensory experience of taking it all in.