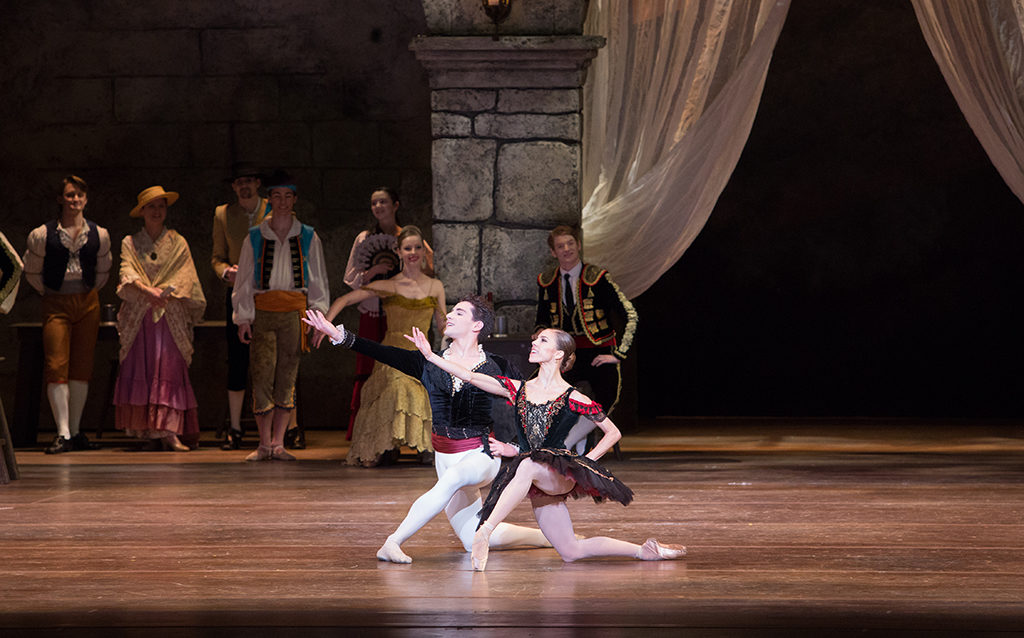 Pennsylvania Ballet opened its 2019-2020 season with the restaging of DON QUIXOTE. The production was as much of a spectacle as its premiere in March 2016, and better.  As the dancers lived in the ballet for the second time, their acting and movement were more natural and more authentic.

DOpN QUIXOTE is especially popular among ballet fans for its comical and lively story and for showcasing superb techniques of both male and female dancers. Angel Corella’s version, as the audience anticipates, is also filled with challenging pas and lifts which stun and stirred up the viewers.  At the same time, the performance on October 17 was much more than a grandiose entertainment. It left me with a sense of home, teamwork, and partnership for the sake of art.

The title roles of the evening was Principal Dancer Oksana Maslova (Kitri) and Soloist Ashton Roxander (Basilio).  Oksana has been with Pennsylvania Ballet since 2014 and has performed numerous principal roles before and after she joined the company.

On the other hand, Ashton was a trainee of Boston Ballet in 2015 before joining PA Ballet II for 2016-2017 season, and joined Pennsylvania Ballet starting from the  2017-2018 season.  He’s had outstanding performances since, but standing on the stage as Basilio for this full length production must have been quite a huge moment. He may have had shaky knees before leaping onto the stage, but once surrounded by his fellow dancers, his Basilio was vivid and charming.  His pirouette was  perfectly accurate and clean.

The highly demanding lift where he lifted Oksana with just one arm thrilled the audience — which may have not been so easy if his partner was not Oksana.  It was astonishing that Oksana never lost her precision and sharpness even when she was dancing in such a rapid movement.  Her steps were never rough, always airy, and vivid.

The key attribute of Pennsylvania Ballet’s DON QUIXOTE is the depth of each and every character in the ballet. The hot couple of the village, Mercedes (Alexandra Hughes) and a matador, Espada (Arian Molina Soca), heated up the theater. Matadors and Fandango ladies behind them stole my eyes.

The gypsy dance by Principal Dancers Mayara Pineiro and Jermel Johnson was, of course, powerful.

Yuka Iseda performed Cupid in Act II after she performed Kitri in the matinee of the same day.  There was no hint of exhaustion from her cupid. Just enchanting and magical.

Pennsylvania Ballet Orchestra led by Music Director and Conductor Beatrice Jona Affron contribute a huge part to the success of the evening. As the dancers changes tempo frequently and show off their big moments, the music still creates fluent rhythm and scenery without awkwardness.

Of course, the main character of the ballet is Don Quixote, as the title indicates.  Ballet Master Charles Ashkegard, together with Sancho Panza (Etienne Diaz), guide us through the adventure and let us live in the world of this illogical, dramatic, dreamy, and beautiful ballet.

By casting dancers from all ranks for key roles, the company has given the opportunity to the dancers to challenge themselves and thrive.  It is exciting to see how they innovate.