In putting together my schedule for this year’s festival, it was the invocation of John Carpenter’s name that attracted me to Bacurau, a film which claimed to draw inspiration from the auteur who brought us some of the greatest genre cinema of the 1980s. How interesting to see a Carpenter-esque flavor used in a distinctly non-American story. Bacurau is a Brazillian/French production that features prominent roles spoken in multiple languages. Yet despite being an international entry, the American influence, specifically that of Carpenter, is deeply felt. Furthermore, the film finds time to honor the cinema that Carpenter himself was channeling as inspiration. Mileage may vary among the individual viewers as to how well the pastiche of influences serve the film, but here’s no denying the love on display.

To treat Bacurau as just an homage, however, would be to do a terrible disservice to the film’s unique merits as an unconventional genre exercise. Now that genre cinema is starting to crack mainstream appeal via a newfound cultural appreciation of such things in a post–Get Out world, the notion of what “genre” looks like is undergoing some changes. In fact, a lot of films at his year’s festival could easily fit under that descriptive umbrella, despite few being billed as such. If Bacurau is what an international genre film looks like, color me excited, because it’s a great look. 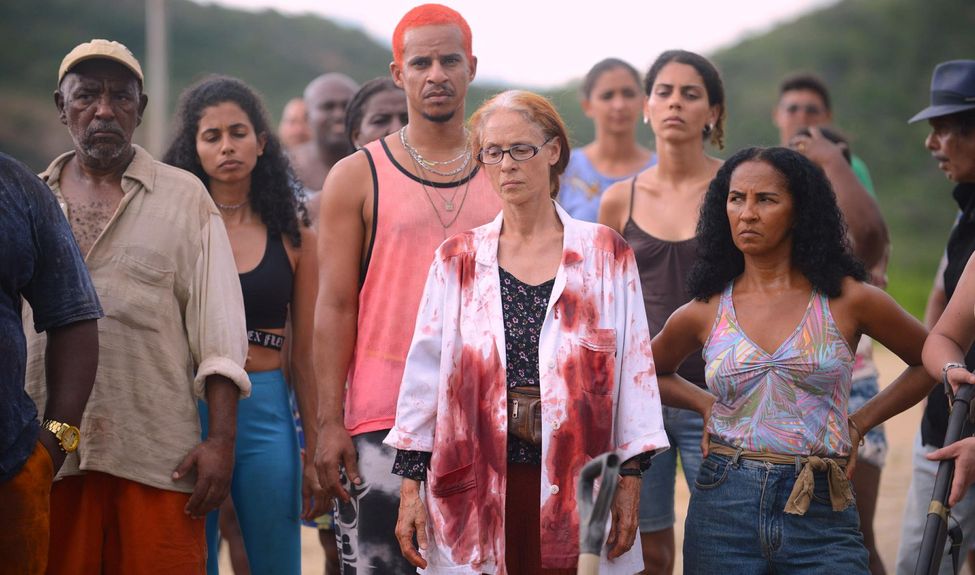 The titular village of Bacurau is one that survives by the seat of its pants. The citizens regularly get supplies from the nearest city center, but this typically comes in the form of random opioid pills, small amounts of non-perishable food, and books for their library – delivered unceremoniously via dump truck. To the mayor, a blowhard who goes by the name Tony Jr., the denizens of Bacurau are a needy annoyance that he must appease in order to obtain votes for reelection. They don’t buy into his empty promises (a town without access to amenities will naturally turn on a government official who broke his promise to provide them), but all they can really do is laugh him off and accept whatever pittance of supplies he provides. Nonetheless, there is a strong familial element that keeps Bacurau strong. It’s this element which must be tapped when the town itself faces a threat scarier than its inhabitants could have ever expected.

I’d rather not go into further detail, as the pleasures of Bacurau come from the many ways in which it attempts to hide its true identity from the viewer, but it’s no spoiler to say that what follows is a riff on Carpenter’s Assault on Precinct 13, itself a riff on siege defense movies like Seven Samurai. Simply put, Bacurau is facing an outward threat, and it’s up to the people to defend their town. Certainly, in Brazil, a country undergoing some difficult political changes, there’s no larger defensive force to help out such a tiny town. The locals are on their own…together.

Bacurau takes its time building to a bonanza of a climax, and in doing so serves its characters well. Few are elevated above ensemble, but it’s the characterization of the ensemble itself that resonates most. The citizens are many in service of a whole. Odd to use this term in such a setting, but the civic pride within Bacurau is admirable. We also are given a side plot involving the outside forces, which gives Bacurau more depth than something like Assault on Precinct 13, which famously uses a single stroke of the pen to cleverly write off any need for characterization of the villains. The villains here lack said civic pride, and it’s this chink in their armor which may give the locals a serious edge. I really want to say more, but I can’t.

Udo Kier is in the movie. I’ll say that. He rules.

If Carpenter’s influence could be made any clearer, it’s in the use of one of the filmmaker’s original musical compositions. The name of the track is “Night” and although it is not specifhttp://filmadelphia.org/events/pff28-bacurau/ically from any of his movies (during a live performance he mentioned that such songs were from the movie “IN OUR MIIIIINDS”), it has a quintessential Carpenter feel. If you didn’t know it was his song, you could’ve guessed. What makes the use of it interesting is that it’s a loaded tune, typically the type layered over some heightened action. Here, it’s used as a backdrop for a rather passive scene. It makes no logical sense, but it works beautifully, resulting in a sequence that could serve as a stylistic microcosm of the entire film: It’s everything a genre fan could love, but it looks brand spankin’ new.

Part of the 2019 Philadelphia Film Festival. Scheduled for release in early 2020.