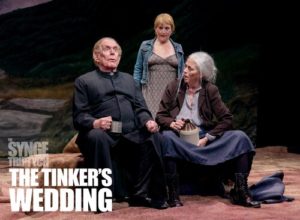 Quintessence Theatre Group is offering Philadelphians the rare opportunity to experience the complete works of J.M. Synge. In repertory with their solid production of Playboy of the Western World, the company presents three of Synge’s one-acts (the tragic Riders to the Sea, the eerie In Shadow of the Glen, and the broadly funny The Tinker’s Wedding) as The Synge Triptych. Buttressed by Irish folk songs, this is an evening that celebrates the common people of Ireland’s rural and remote locales. With performances ranging from steady to exceptional, the ensemble allows Synge’s rich writing to land front and center.

One of the delights of repertory theater is to see actors across different productions show their versatility. Brandon Walters, who in Playboy plays the title character with equal parts impish delight and pain, here acts in a minor role as a lovable oaf and plays the guitar for all of the pre-act folk songs. In the standout performance of the evening, E. Ashley Izard, plays an almost mythic, mournful matriarch in Riders and a broadly comic, drunk pauper in The Tinker’s Wedding. The vastness between these two roles and the talents they require couldn’t be larger. She succeeds in both. During her epic monologue toward the end of Riders to the Sea, she seems to summon a lifetime’s worth of sorrow while maintaining an otherworldly steadiness. In The Tinker’s Wedding she prances across the stage in gleeful irreverence. 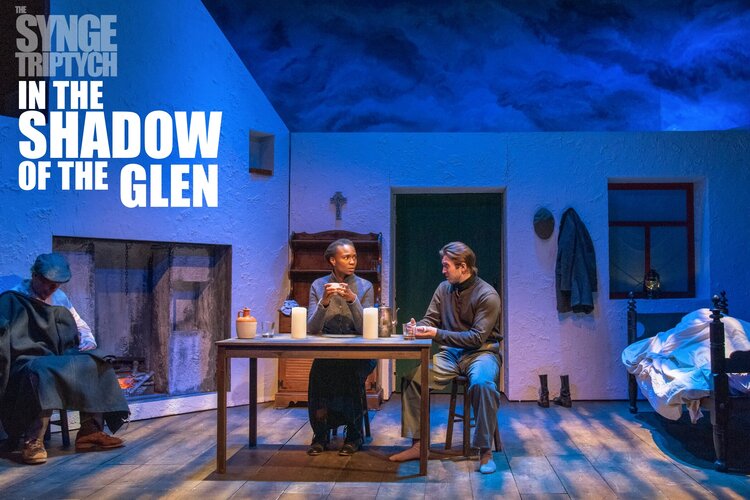 While Riders to the Sea and The Tinker’s Wedding represent almost binary representations of tragedy and comedy, the middle play, In Shadow of the Glen, represents a murkier middle ground. Eunice Akinola stars as Nora Burke, who seems to have much in common with Ibsen’s Nora Helmer. She is in a pragmatic marriage to an older man she does not love. We are present on an eerie night, in which her husband (Joe Guzman)  appears to be dead and she receives a visit from a wandering tramp (Floyd King). Akinola plays Nora as complacent and stuck, but as she is pushed to make a life-changing decision she transforms into a more confident, decisive woman.

One of the challenges of one-act plays is that the audience does not get much time to build a relationship with the characters before we reach the climax. This problem is certainly persistent during the Triptych, especially as we are presented with three wildly different tones. However, the ably directed and acted productions make up for what is lost in the structure of the evening. Alex Burns’ inventive set flexibly transforms into three different spaces. John Burkland’s lighting design is noticeably stunning.

Luckily for Synge fans, the Festival has extended until November 3. To round out the complete works, Quintessence is performing readings of the playwright’s other two plays during Festival weekends. After Friday and Saturday evening performances, attendees are also treated to “Pint and a Poem” which transforms the Sedgewick Theater’s lobby into a pub where actors and audience members can listen to and read Synge’s poetry.