This years Palme d’Or winner at Cannes was also the opening night film for the 28th annual Philadelphia Film Festival. As is typical with opening night fare, the folks at the Philadelphia Film Society like to kick things off with something both explosive and artistic, and Joon-ho Bong’s latest masterwork Parasite is no exception. Since this is a film that one should go into as blind as possible, I will do my darndest not to spoil the fun. The less you know, the better, and I intend to keep it that way.

Those unfamiliar with this filmmaker would do well to look back on his incredible filmography. He’s touched upon countless genres, none of which typically share DNA with one another, and in doing so has created a genre all his own. A Joon-ho Bong film, whether an outright monster movie like The Host, or a true crime procedural like Memories of Murder, is always something to behold. A true auteur whose storytelling skills are matched by his technical proficiency, there’s no denying that even his lesser works are valuable artifacts of both the artistry and craft of this wonderful medium. With Parasite, Bong is operating at the top of his game. It’s no wonder it took home the top prize at Cannes, with many critics calling it his best work (I’m a Memories of Murder guy, but I’m not here to do anything but sing the praises of his latest). 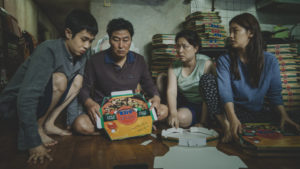 Long time Bong collaborator, Kang-ho Song plays Ki-taek Kim, a father who lives in a glorified shack with his wife, son, and daughter. He can’t find work, and the family makes money by completing odd jobs such as folding boxes for a local pizza delivery service, and they can’t even do that right. Pathetic is the word, yet they aren’t necessarily unmotivated, just beaten down. When Kang-ho’s son Ki-woo Kim gets an opportunity to substitute for his college-bound buddy as a tutor, it’s not long before the entire Kim family finds themselves taking advantage of the tutored student’s well-off family. Saying anything more about the plot would be disrespectful to the viewing experience, so I’ll bite my tongue at this point. Needless to say, as is on-brand for a Joon-ho Bong film, things get pretty fucked up pretty quickly.

Much like Bong’s previous film Snowpiercer, Parasite is primarily interested in exploring the ways in which society is rigged against the have-nots. But where the former depicted different social classes in the form of a train with the privileged at the front and the proles in the back, Parasite takes this imagery and turns it on its ear, making vertical the depiction of class ascension. The rich Park family lives in a higher part of town, elevation-wise. To get to the Kim household, one must descend a lot of stairs, hills, and ramps. By invoking gravity into the metaphor, it makes literal the difficulty of climbing up a social ladder. It also makes it just as clear how tenuous a spot at the top can be. One false move and you’re sent soaring back down to the bottom, likely to stay.

Mixing humor, horror, family drama, and even elements of a heist film, Parasite is high impact entertainment that has the added bonus of being deeply thematically resonant. As previously mentioned, this is an indictment of a class system that is self-reinforcing on every level. Perhaps this is why one must either be extremely lucky or clever enough to pull off mass subterfuge in order to rise up. One could expect, in this current time of financial disparity, that Parasite would be a simple “rich versus poor” battle, but it is nothing of the sort. There aren’t any good guys or bad guys, just human characters pushed into wild situations by circumstance and back-against-the-wall decision making. There’s plenty of talk about respect, honor, and knowing one’s place in the rank and file of society. As such, I found myself thinking that everyone is guilty, while also wondering just who, if anyone, could be blamed. It’s challenging stuff, made more challenging by the madcap nature of the plot.

As a piece of filmcraft, Parasite is impeccable. The cinematography by Kyung-pyo Hong (Burning) clashes the crisp architecture of the Park household against the grimy dampness of the Kim, uh, shack. The people too are scrambled into many image permutations – sometimes wearing the costume of a have-not, other times exhibiting the confident style of someone with apt financial resources – with each character matched and mismatched to their environment many times over. Credit, of course, is due to the performers, but it’s the color palette and textual richness of Hong’s photography that allows these clever image disparities to be felt. Add to that the score from Jaeil Jung (Okja), which begins as a toy chest jingling and expands into the sounds of a carnival from hell, and you’ve got yourself an idiosyncratic cinematic treat that must be seen to be believed.