Dialect coach Joel Goldes breaks down what it takes to learn an accent. In Come From Away, he prepares the various casts to speak in the dialect of the real life person they are portraying.  The show tells the true event of the 7,000 passengers from 38 planes that were diverted to a small Canadian town on September 11, 2001. It’s a little known story of what happened in Gander, Newfoundland on a day no American will forget. 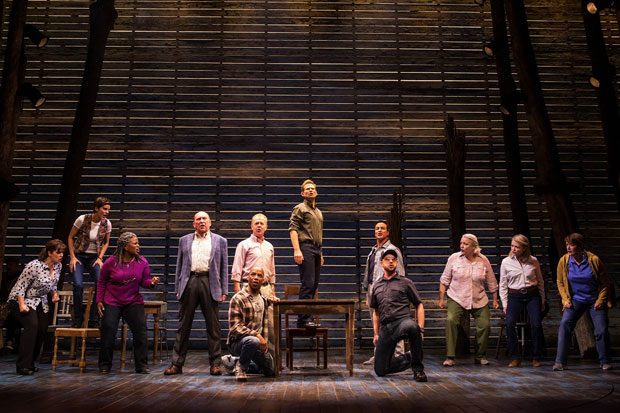 Debra Danese: How did you get interested and started as a dialect coach?

Joel Goldes: I loved Monty Python as a kid, watching the TV show, memorizing the albums, and goofing around with the accents I heard. As an actor, I was always drawn to roles with accents. I then learned to break dialects down systematically in graduate school at the University of California at Irvine, where I took three years of daily Voice and Speech classes. I started teaching while in grad school, then coached productions I was acting in. After acting in New York for a while, I got into directing and producing theater. I found I wasn’t happy being in charge of the whole production, but that dialect coaching allowed me to be responsible for one vital part of a production, so I put my focus there.

DD: What is the most challenging part of teaching a dialect?

JG: It’s challenging to figure out how each actor learns and how the new accent differs from their natural accent. With Come From Away and its various productions, one challenge has been working with Canadian, English, Irish and Australian actors, and helping them find the accents we use in the show. Any dialect is composed of sound changes or differences from someone’s natural accent, so that part is fairly straightforward. I try to consistently present the accent by showing how the tongue moves to make the various sounds that make up the accent. We all have trouble hearing sounds that aren’t used in our original accent (or language), but once someone is shown what they need to do with the tongue, jaw, and lips to make the new sound, they can start to do it and hear it themselves, as well as, hearing it in sound samples of native speakers of the accent. I show them on a chart of the mouth (the Vowel Chart) while demonstrating the sound differences, so they both see and hear it, and some combination of these helps them understand the sounds needed for the new accent.

DD: Tell us about your work with the cast of Come From Away. How many different dialects are there and what was the coaching process like?

JG:  Depending upon the production, there are 12-14 different accents, though this is a bit deceptive, as there are variations within each accent. For example, the characters Nick and the British airline pilot both have English accents, but Nick speaks with Received Pronunciation (RP), the more traditional, Upper Class English accent, while the pilot has more of an Estuary sound, RP blended with some working class sounds. Beverley, the flight Attendant, Diane, and the Texas Passenger all have Texas accents, but the Passenger has the broadest accent of these. Beverley and Diane have about the same Dallas (or Ft. Worth, in Bev’s case.) While the actual Diane is from Houston, and the Diane character’s accent is slightly milder than the previous two.

Creating the accents for the whole show became a question of balancing moderate versions of the accents used, and then being careful not to overwhelm the audience with too many different dialects. We rejected Chicago, Minnesota, Boston and several other accents for passengers as being too close to the Gander, Newfoundland accent, and, therefore, confusing.

After the La Jolla production, we also found that it was helpful for the cast to use the Gander accent when singing as those characters, so we added singing in the Gander accent to the Seattle and Washington DC productions, and every one after those.

Through the Broadway production, I was careful to annotate all the different sound changes in my script; but as I’ve worked on the subsequent productions, I find I don’t need those notes, and just listen to the actors and suggest corrections based on what I know the target sounds need to be.

DD: What do you find to be the most challenging accent for American actors to learn and why do you think that is?

JG: The Gander accent is definitely hard not to overdo. In La Jolla, we found that it was tempting for the cast to be drawn toward Irish accents, and though some Newfoundlanders sound very Irish, we chose a more moderate path so the audience wouldn’t get the mistaken impression that the show was set in Ireland. The Gander accent we use in the show is quite mild, and it’s always easier to do a broad accent. Many actors have done Irish accents, so the brain naturally reverts to those.

DD: If you weren’t a dialect coach, what type of work would you be doing?

JG: I might be some kind of field biologist. For the past few years, I’ve spent my free time cleaning up a local creek, as well as removing invasive crayfish that prey on native fish and Pacific tree frogs. In the last 2 -1/2 years, I’ve removed more than 60,000 invasive crayfish. I donate them to wildlife rehabilitation centers that feed them to orphaned raccoons.

DD: You’ve worked in cities world-wide. What has been your favorite place so far?

JG: I’d like to say that I’m very fortunate to get to travel the world with this show, which is very unusual for a dialect coach. I’ve really enjoyed paddle-boarding  through the Toronto Islands and seeing the stunning Winter Garden Theatre, which was shuttered for nearly 60 years; snow-biking and cross-country skiing in Winnipeg (at -10° C); biking around the canals in London; visiting Dublin (and the Guinness beer); day-tripping  to Northern Ireland and the Giant’s Causeway, with its hexagonal volcanic columns emerging from the sea; and seeing penguins on a breakwater in Melbourne, Australia, before daybreak (on my third attempt!).