“…there’s a great gap between a gallous story and a dirty deed.” 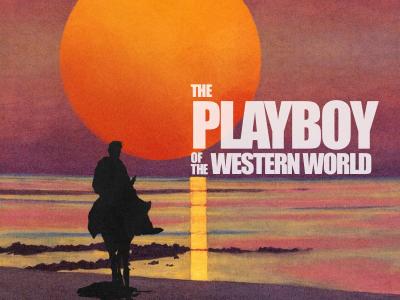 When J.M. Synge’s Playboy of the Western World premiered in Philadelphia in 1912, riots broke out and the actors were arrested for public indecency. This mirrored riots that had already occurred in New York City and famously, in Dublin. Many Irish nationalists and intellectuals resented that it was presented in English as opposed to Irish. They winced at its ambivalent stance toward violence and the moral ambiguity present in the play’s Irish country folk. More then anything, they reacted violently to a line that referred to scantily clad women. Quintessence Theatre Group’s production of Playboy of the Western World did not break out in riots, but this skillful production with consistently strong performances manages to surprise and delight.

The play takes place in a shabby rural pub in the County Mayo in the west of Ireland. It is a dark night and barmaid Pegeen Mike (Melody Ladd) does not want to stand watch over the bar by herself while her publican father Michael (Joe Guzman) and nebbishy fiance (Christopher Morris) go to a wake. Enter Christy Mannon (Brandon Walters), a slight disheveled young man, who claims to have killed his father eleven days prior. The pub dwellers are not horrified but seduced by the story.

Alex Burns’ direction keeps this production nimble, contemporary, and funny. The time of the play has been moved up to the present day. This decision allows for some flexible casting, turning one of the flirtatious village girls into a gay man (Daniel Miller). Importantly, this was not done for a cheap laugh or tokenism, but through an authentic need to portray contemporary life. The production is also grounded by three standout performances from Ladd, Walters, and Megan McDermott. Ladd’s Pegeen Mike is a world-weary young woman, who only briefly reveals her tender side. Her journey through the arc of the play is profound and deeply sympathetic. As Christy, Walters seems blown away by his own charisma. McDermott, as the Widow Quinn, brings a sense of practiced desperation to her flirtations with Christy and her rivalry with Pegeen Mike. The gargantuan task of authentic Irish accents for the whole company is successful, especially in the second and third acts. There are times early on in the play, where the accents and the complicated Irish syntax of Synge make a plot synopsis helpful, but not necessary. Lighting (John Burkland), sound, and set (both by Alex Burns) help transition the production from everyday life to operatic heights. All three are employed to an especially dramatic finale that leaves more questions than it answers.

Over a century since the Playboy riots, Synge has been reclaimed as a seminal voice in Irish theatre. This September and October, Quintessence Theatre Group is performing and reciting the complete works of J.M. Synge. On Thursday, October 10, they will open The Synge Triptych (in rep with Playboy of the Western World) and over the weekends of October 18-20 and 25-27, they will be performing both productions, along with readings of his poetry and other plays.