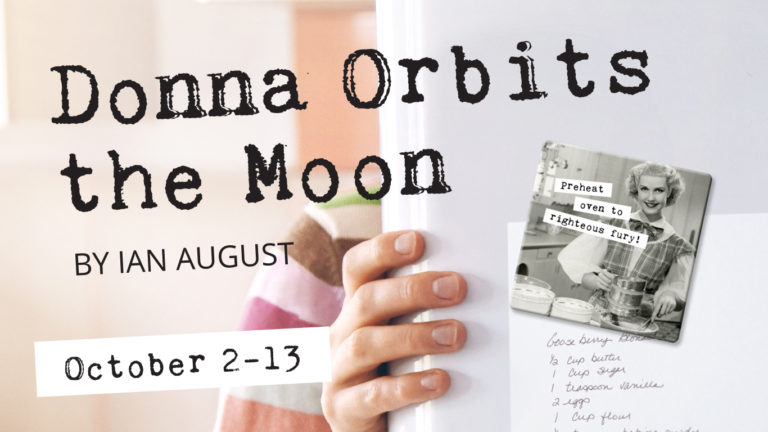 At first it seems to be just another mad housewife story: a church-going, cookie-baking, carpet-vacuuming middle-aged empty nester whose husband works until 11 p.m. and most weekends. But Ian August’s play, Donna Orbits the Moon, presented by Tiny Dynamite, turns into a long, ultimately moving monologue delivered with exceptional authenticity by Sabrina Profitt.

We are in a small town in Minnesota in 2010. Her accent is convincing, and the set is merely an overstuffed plaid armchair and a Walmartish rug, with various initially meaningless small objects hanging from the ceiling (scenic designer Mrie Laster). The set carefully makes no dramatic claims on our attention.

Donna describes three episodes— “I had a moment”— in which she suddenly turns wild and violent. Each episode ends with her adult daughter or husband saying “You need to go to the hospital.” This will turn out to mean something more than treating her increasing derangement.

There is another name in the program, A Voice (John Lopes), who claims to be the astronaut Buzz Aldrin; thus the play’s title. His repeated line, “You need to go up before you can land” is the key to it all.

There is a tiny clue dropped into an exchange in the town’s library between Donna and a young man who asks that she send his regards to her son Charlie—they were in 7th grade together—saying that he’d heard “his tour” ended. I’m providing no spoilers, just advice to pay close attention. And while you’re paying close attention, consider the gesture Michaelangelo made famous and profound: the life-giving touching of two hands. Claire Moyer directs.

As always, Tiny Dynamite follows a British tradition of dinnertime shows: a Play, a Pie and a Pint; in the American version, this becomes a slice of pizza and a choice of beer, wine or soda.