The history of the Joker is one that is purposefully muddled. Over about 80 years, have been many iterations of Batman’s greatest foe, and even though this is the result of many factors, including the implementation of the Comics Code Authority, it is also partially by design. The Joker has classically prided himself on not having a firm origin. Many times in the annals of DC Comics the Joker has explicitly stated that he prefers his origin to be “multiple choice.” As such, really any origin story can be validated or invalidated by the rules of whatever franchise canon needs serving. Typically, his origin is something adjacent to one of the following ideas:

This particular story is more in tune with the latter, but seeing as how it takes place in the 1980s, this iteration of the Joker is not a response to Batman. In fact, for the first time in my memory, it’s posited as the other way around. It’s not a spoiler to state that Joker does indeed include a small amount of Batman lore, but make no mistake, it is not a Batman story. In fact, it’s barely even a Joker story. Director/co-writer Todd Phillips has indicated that the comic book branding of this film was actually a little bit of behind the scenes sleight of hand. He wanted to tell an adult drama about a dangerously mentally ill man (owing heavily to both Taxi Driver and The King of Comedy), and only opted to tie it to comic books as a way to get a proper budget. Smart move, what with comic book movies reigning supreme at the box office. And really, there’s no character out there that gets people excited more than the Clown Prince of Crime.

Joaquin Phoenix plays Arthur Fleck, a hapless loser who lives at home with his sick mother (Frances Conroy), while struggling with a condition that causes him to laugh uncontrollably during moments of tension. He pays his bills working as a sort of freelance clown, holding “everything must go” signs for failing businesses and entertaining children at the hospital, Patch Adams style. He checks in regularly with an exhausted social worker, and frequently makes eyes at his attractive neighbor Sophie (Zazie Beetz). Fleck has dreams of being a comedian, hoping to one day be featured on the Murray Franklin Show, hosted by the eponymous comic, played with winking gusto by Robert De Niro (essentially trading up from Rupert Pupkin to Jerry Langford). 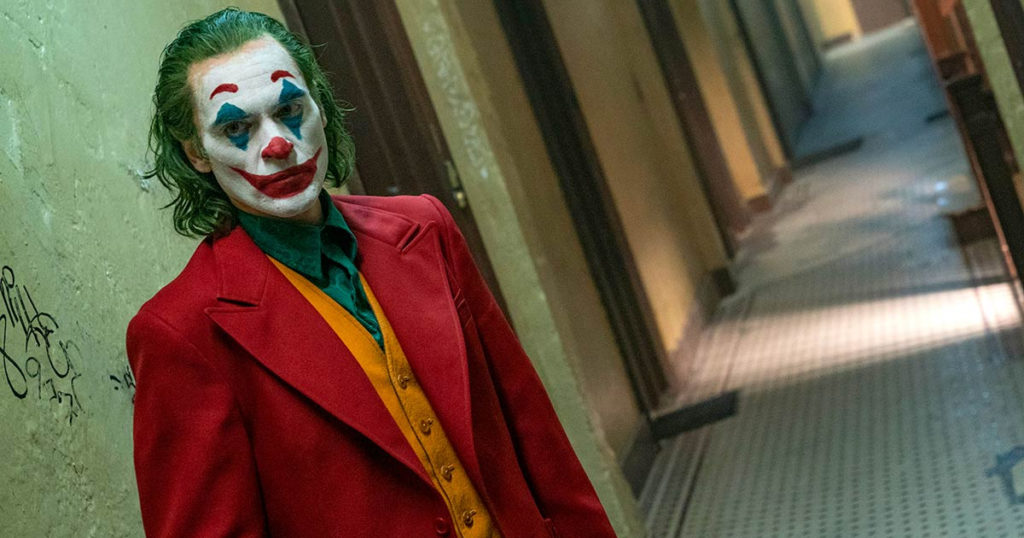 A series of unfortunate events seems to always be unfolding in Fleck’s life, and our story picks up during his final push into madness. Fleck seems to be at the whim of a million outside forces, all of which exacerbate his mental issues in a big way. Before long, he discovers that the image of a vengeful clown is one that resonates with Gotham’s population, themselves on the verge of societal collapse. One violent thing leads to another and, well, you know the rest.

It’s no surprise that Phoenix gives a hell of a performance here. As someone who famously shied away from franchise roles, it makes sense that Joker is where he’d finally take the paycheck. It’s a meaty role both emotionally and physically (and it’s one that Phoenix refused to take until the contract indicated he would not be required to do sequels). Phoenix’s unique physicality makes for some truly gut-wrenching moments of madness from Fleck. At the same time, he evokes a level of pity that is unique to this version of the character. We feel badly for him, but we also despise what he becomes. It’s a challenging thing to ask of an audience, and if the pre-release controversy is to be reckoned with (and it shouldn’t – it’s patently dumb), this level of empathy is difficult for many viewers.

What’s clear, however, is that the movie does not make a hero of Fleck. It only wishes to understand how he found himself in a position to capitalize on violence, while also acting as a cautionary tale to a world hell-bent on eliminating safety nets for those on the fringes of society.

The supporting cast does great work as well, with the standout being Robert De Niro, whose Murray Franklin represents the duality of being precisely what Fleck dreams of becoming, while also being a figurehead of the world that Fleck is acting out against. Zazie Beetz is underused (although it does make sense to her character’s function — you’ll see), and it’s a shame because her moments with Phoenix mark the only times that his scene-chewing doesn’t eclipse every performer in frame. Well, her and Bryan Tyree Henry, who shows up for a single scene and manages to give us a thorough characterization of an Arkham Asylum desk clerk that nobody asked for but everyone who loves great acting can appreciate.

As previously mentioned, the story does extraneously try to connect to the story of Bruce Wayne, mostly via a recharacterization of his father. Thomas Wayne, once an altruistic businessman with a familial love for Gotham, is now a Trumpian blowhard whose charity may not be given with the purest of intentions. It’s an interesting turn of character, but it’s one that, as with Joker’s origin, can be explained away (if you like) by remembering that the story we’re seeing is from the eyes of a supremely deranged man – an unreliable narrator if there ever was one. Your mileage may vary as to whether or not this Batman tie-in material feels right within this film, but it worked for me (especially since there are a litany of cheeky references to other versions of the Caped Crusader).

This is a dark, violent movie, with little by way of reprieve. The humor is minimal and appropriately mean-spirited. In conjunction with the limited specificity toward Fleck’s, um, pre-existing condition, this may rub a lot of viewers the wrong way. It’s a tough line to walk as a filmmaker, I’d imagine. You want to keep the mysterious nature of the Joker alive while also exploring his mental state in a way that, while not terribly deep, is considerably deeper than any prior cinematic version. Kudos to Phillips, a comedy director for the most part, for really stepping up his directorial game in this regard. This is not shot like a comedy, where the camera is absent while the performers to the heavy lifting. No, this is direction that works in tandem with a veritable circus of performances, dancing alongside Fleck as he transforms into the Joker, while also capturing Gotham City in a fresh new way, evocative of the New York cinema of the 1970s. Kudos too to cinematographer Lawrence Sher, for wringing a rather varied color palette out of a collection of drab, seedy locales.

Grimy too, is the droning score from Hildur Guonadottir. It’s heavy on the strings, designed to soothe and unsettle in equal measure, creating within the viewer a sense of comfortable unease. I can only imagine this is how Fleck feels while hiding behind the makeup of his dastardly creation.

In a landscape drowning in superhero pictures (I’m not complaining, just observing), it is quite refreshing to see the medium of comic books cinema used to new ends. Whether or not we “needed” another Joker story is irrelevant when the one we got is this damn good. Every time I think I’ve seen the gamut of what can be done with superhero adaptations, something like this comes along and proves that there’s plenty of juice left in the machine, just so long as the studios are willing to take the leap.