7:28 My show partners and I run through the entrance to Wells Fargo Arena. We are pumped to see Hugh!

7:33 It begins! The show opens with Hugh in a white tuxedo and very coiffed hair singing “The Greatest Show.” He is stomping downstairs with back up dancers! He is going for it!

7:43 Hugh recounts how he got cast as Gaston. Impressively does the “Gaston” dance. He claims he’s done it 400 times.

7:48 Hugh mentions wolverine. This is a brief respite for all the heterosexual men in attendance (a seemingly large amount). A few guttural “woop”s could be heard.

7:50 Hugh sings a love song to Deb, his wife, who is not present. He then tells a weird story about her in a hotel. Photos of her abound.

7:59. Hugh tells a somber story about his childhood struggles with “sport.” He sings a pretty flat version of “You Will be Found” from Dear Evan Hansen. This concludes with performances from ANNA Cruces Women’s Choir and the Philadelphia Gay Men’s Chorus which livens up the affair.

8:14 People are very excited about Keala Settle. She is barefoot! She sings “This is Me,” which continues to be a jam!

8:18 Keala gets a deserved standing ovation. She seems genuinely delighted. She is the best part of the show so far.

8:24 The Les Mis portion begins with a long clip from the beginning of the movie.

8:25 Hugh appears in all black. Because this is serious! 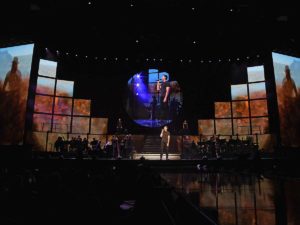 8:34 People around me are very jazzed and talking about how much they love Les Mis.

8:36 I peruse the merchandise. I see several children in The Greatest Showman costumes. It is cute!

8:54 interval is over. Peter Allen section coming up!

8:59 Hugh engages in some audience participation as Peter Allen! He is going full camp!

9:02 Dan, a cool lawyer pulled from the audience, does a surprisingly good ABBA cover.

9:08 Hugh seems most at home playing this character. It is much warmer than he is as himself. Audience is having a ball

9:20  Hugh returns to The Greatest Showman, singing “A Million Dreams”. There is really evocative choreography with sign language. Choirs come in and this song really swells!

9:27 21st Century Fox theme music and a tribute to Old Hollywood!  Starting with …”Luck Be a Lady.”

9:33 Hugh asks a random member of the orchestra to make it sexy. Paul, the trombone player really sells it!

8:39 Hugh delivers a monologue about how he was called a sissy for wanting to dance. Then he taps and taps and taps! To show tunes! and rock! And funk! And now he’s drumming!! What can’t this man do! I really hope he is having the time of his life!

9:50 Hugh talks about the “magic of the outback,” which leads to a celebration of indigenous Australian culture feature two didgeridoos (played by Paul Boon and Nathan Mundraby) and an aboriginal singer (Clifton Bieundurry). At first, this felt a little exploitative (and it is) but I also appreciated the opportunity to hear this music on such a large platform. Some added cultural context would have been appreciated!

9:55 Hugh introduces these musicians. Hugh admits that he has always introduced them by the names known by “white people,” He then gives the mic to them to provide some context and to introduce themselves by their names in their indigenous language. Hugh connects this performance to a nonprofit call NOMAD TWO WORLDS.

10:00 Hugh jumps back to “Mack the Knife”. This show feels a little random.

10:07 He makes us stand up and dance to ”From Now On” from The Greatest Showman. He introduces the dancers and the backup singers. He wraps it up with one last Peter Allen song.

10:10 We leave, exhausted,, basking in showmanship, frankly afraid to feel anything other than razzle-dazzle euphoria. I’m not exactly sure what the show was, but Hugh Jackman is certainly gunning to be the greatest showman.