Published by The Dance Journal, reprinted by kind permission.

When Mikhail Baryshnikov staged restorations of the Judson Church dance collective to Philly ten years ago, a chunk of the audience stuck around for the whole performance. The walk-outs expected, it seemed, to see Misha the danseur noble do a turn or two, however moderne. They should have felt cheated because the Judson selections, as danced, looked like dated museum pieces and a reminder that  absent its context of the 60s subversive social aesthetics, it can look mummified. 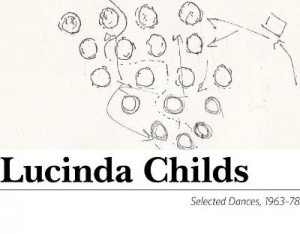 In contrast, the retrospective of Judson Church choreographer-dancer Lucinda Childs’ SELECTED DANCES, 1963-78 last week was instructive and artistically purposeful.  The retrospective was underwritten by FringeArts and the Pew Foundation and has been in development since Childs’ restaged her 1979 opus DANCE, to a sold-out run, at LiveArts in 2010.

SELECTED DANCES comprised seven short works reprised under the direct guidance of Childs and her stager Ty Boomershine.  And this work is still so vibrant in its exploratory nature, primacy and acknowledgement that Childs’ innovations are part of an evolving dance stream.

It officially (and auspiciously) served as  the first official performance at the new FringeArts theater space on Columbus Blvd.  Program A included  two works (Melody Excerpt and Interior Drama) that were not danced when the performances moved to the second floor University of Arts studio at 1401 Walnut St. for program B, which ran in four continuous performances all afternoon.

It is great to see pioneering work by Childs and danced by six dancers who obviously have incorporated Childs’ aesthetic independence into their commitment to present this material with craft and stellar artistry.

Janet Pilla opened with the 50 year old solo, Pastime (1963), three scenes, seemingly disconnected, that Childs describes them as ‘jump-cuts’ similar to film editing. Pilla starts inches from the audience, in a one- footed position until she hops up and down then freezes, modulating her working leg in crane like maneuvers, flexing her foot in slo-mo, her head turned the other way. It is an essay on the squirrelly mechanics of dance physics. The degree of difficulty with this demonstration deceptively is very high and Pilla is as solid as a Rodin figure in motion. Next, Pilla is in the middle of the studio, her head hilarious jutting out of a stretchable fabric that she shapes (ala Graham) like a tub around her. The score, by Philip Corner, is described as plumbing out of order, with gurgles and water rushing sounds. Pilla stealthily rotates her body as it changes positions and the fabric shapes, a leg juts out, comedically, a foot rotates sensually, the whole time Pilla staring stony holes at the audience. Then Pilla is at the back of the space, incongruously, in an inverted contortion, but looking so soulfully at the audience, it leaves you wondering about everything you just saw.

The humor continues with Museum Piece (1965) another solo with Childs’ editorial narration on dance theory (which she admits in program notes) that could be “totally insane.” Megan Bridge moves around and discusses the confluence of art commerce; talks of Cagean theories of artistry occurring through non-choice. Bridge precisely scatters different color discs on the floor to talk about the relation of color and spatial relativity. Narcissus is recalled as Bridge pulls out a hand mirror and there is the not so subtle message that it’s ok to laugh at this intellectualizing. Bridge then talks about precarious balance of dancers and is aloft on a bar stool the arced pose of Marcel Duchamp’s wincing flying dancer. You can imagine its liberating effrontery in the 60s when theorizing was sacrosanct among the art hipsters.

Katema (1978) Childs’ compelling quartet that previews the dynamics of DANCE, in a more concise format. Nora Gibson, Gabrielle Revlock, Michele Tantoco and Annie Wilson face off in four corners and move forward and backward, swinging arms and establishing rhythmic, accumulating patterns, with slight variations at times on each pass cycle that keeps evolving. The effect is hypnotic, the random variations draw you closer into the dynamics at play; the classicism is introduced with the quartet adding shimmering pirouette runs within the patterning before they spin out of the frame. This effect seems like a time-lapse exploration of dance DNA toward classicism and beyond.

Reclining Rondo (1975) a trio, based on yogic poses and reclined positions is danced with serene precision by Gibson, Revlock and Wilson. Now those cross leg have used meditative poses used by many choreographers in ways that make this look very dated and trite, more a studio exercise. A more updated work to show more of Childs’ choreographic variation may have been a better choice. Still these dancers were complete in the Zen zone.

The audience then was instructed to move to windows in the hall that looking over Broad Street for Street Dance (1964). Pilla and Tantoco are dancing amok under the Wells Fargo bank building near a subway stop. They jump around, dodge pedestrians and strike dance poses and throwing in a few jetes and lifts as we hear voiceover narration about the over commercialization and absurdities traversing through urban existence.  The goofy fun that engaged pedestrians, many of whom looks up at us watching in windows, and were amused just as much by our haughty voyeurism. Touché. October 4-6, 2013, fringearts.ticketleap.com/lucinda-childs-selected-dances.