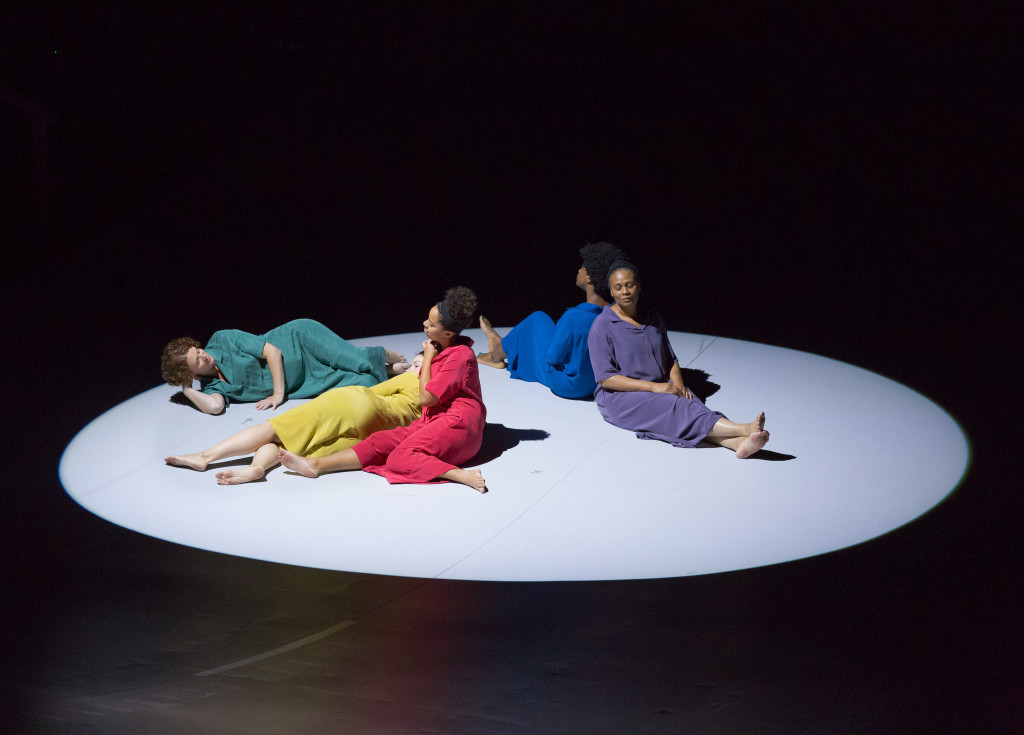 Redesigned for an intimate experience between actor and audience, the Wilma Theater’s stage is reminiscent of a large skating ramp, where moving bodies—both challenged and assisted by the laws of physics—shape their own shadows as they stand in the trajectory of the light beams, refracting and reflecting, diffusing and scattering the voices inhabiting their bodies.

THERE is not a place on Earth’s map. It is not a poem recital, nor is it a play.

THERE is not a game of hide and seek, nor is it the answer to Where?

THERE is a transcendental exploration of the inherent separation implied in the terms Self and Other, Light and Darkness, Past and Present, Peace and War…

Etel Adnan, author of THERE: IN THE LIGHT AND THE DARKNESS OF THE SELF AND OF THE OTHER, the book-length poem that inspired this performance, is a Lebanese American poet, artist and essayist, whose prolific approach to political thought is neither apocalyptic nor utopian. Rather, her unambiguous prose sets in motion an encounter—a conversation between enemies at the front line and lovers in the same circles.

“Such ethical encounter rejects the Western metaphysical tradition of privileging the self over the other; instead, it looks to the self’s responsibility toward the other to give the self its bearings.”1

An intense concurrence of light, sound, and choreography—a resonance of words through human shadows under the mercy of ephemeral lights and electronic tunes—THERE projects onto a stage the landscape of our innermost dilemmas as self-proclaimed landlords of an earth we should know better than to destroy, but we know not enough how to cohabit.

Who are we, a race, a tribe, a herd, a passing phenomenon,
Or a traveller still travelling in order to find out who we are,
And who we shall be?2

African American author and political novelist Toni Morrison addressed similar questions on identity and belonging in The Origin of Others, her last work of nonfiction before her passing. She refers to this Othering—creating a distinction between the Self and the Other3—as a tool historically known for exercising political and territorial power, one that Etel Adnan urges you and me to investigate thoroughly.

Absurdly absurd this absurdity. Shadows, old companions,
speak their own immensity. Why should I desire to undo
Nature’s simplest law – how can I remove your shadow
from your body, and what good would that do to the nations
I care for?4

Co-creators Blanka Zizka and Rosa Barba have succeeded not only in the execution of their vision, but in their choice of such a potent piece of literature unlikely to ever lose its potency, in their translation of complex philosophical paradoxes into a 60-minute meditation-for-all to awaken and ground the soul, and in their effort to make art a vehicle for art, provocative but unscathed.