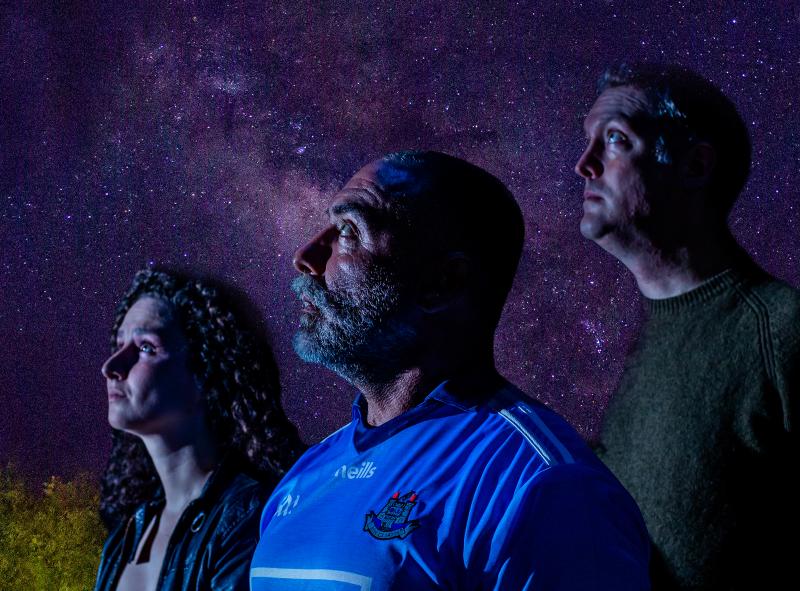 A rundown of theater onstage in Philadelphia this October.

Come From Away, at the Academy of Music, quietly sneaks up on you with its goodness and positive picture of humankind. It’s about the effort residents of Gander, Newfoundland made to welcome thousands of unexpected guests whose flights landed in the emergency of September 11, 2001. The visitors outnumbered the inhabitants, but all was coordinated to keep most matters pleasant. I wondered at how disciplined and “just right” in tone and dudgeon this musical was until I noticed writers Irene Sankoff and David Hein were Canadians. How nice to have folks to can be moving and human without overdoing as our next-door-neighbors. Americans would have clobbered this delicate story.

Conor McPherson’s unique style and knack for suggesting the otherworldly comes through in The Night Alive, being produced by Inis Nua. McPherson may make matters look straightforward, but he would never let that be the case, which is why he’s so popular.

Quintessence had a stunning literary and theatrical success with its faithful adaptation of Mary Shelley’s Frankenstein. Now, Chicago’s Lookinglass Theatre, and David Caitlin, who has brought audiences lauded theatrical versions of Moby Dick and Alice in Wonderland is taking his turn with Mary Shelley’s Frankenstein, being imported from its current run in Chicagoland to Princeton’s McCarter Theatre October 15 to November 3.

Another transfer from page to stage, this one a bit more fanciful, is Matilda, a tale about an exceptional child who thinks she’s ordinary amid a group of ordinary children who think they’re exceptional, from popular writer, Roald Dahl, musicalized by Tim Minchin and David Kelly at Media Theatre.

InterAct Theatre has one of the better track records of all companies in recent seasons, so whatever it produces takes on extra interest. Jonathan Spector’s Eureka Day looks able to expand that streak as it explores the terror of mumps being reported at a posh, convention-following private school in Berkeley.

Ego Po kicks off a season of Sam Shepard plays with Buried Child. Bristol Riverside presents Tom Kitt and Brian Yorkey’s heart-rending musical, Next to Normal. West Chester’s Resident Theatre Company begins its season with Kander and Ebb’s Cabaret. Jennie Eisenhower directs a concert version of William Finn and James Lapine’s Falsettos for 11th Hour. Jenkintown’s Pulley & Buttonhole Theatre provides another look at R. Eric Thomas’s Mrs. Harrison, which had a reading at InterAct and a full production at Azuka. Irish Heritage Theatre, which had a triumph with Marina Carr’s By the Bog of Cats, stages another Carr work, “Woman and Scarecrow,” also to be directed by Peggy Mecham.