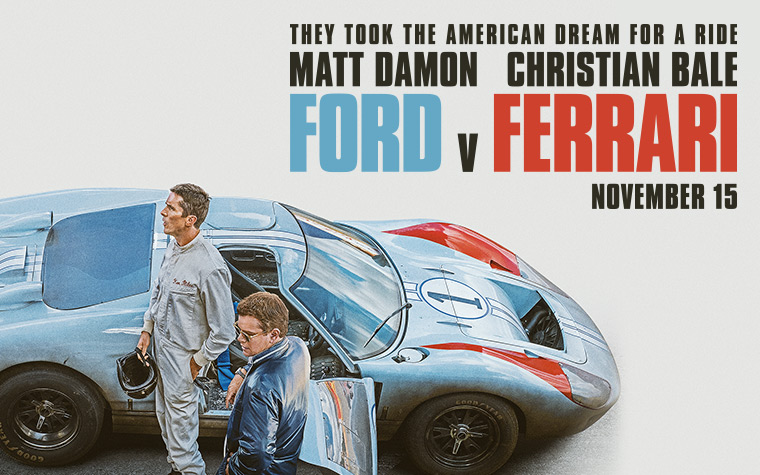 Here are four reasons why the film may be destined to become an instant classic.

It’s safe to assume that a movie starring two Oscar winners will have dynamic, memorable performances.

Acclaimed actor Christian Bale portrays Miles, the skillful engineer and driver whose anger issues long prevented him from making a name for himself. In the film, Miles insists he’s a misunderstood genius who can defeat any other racer. Meanwhile, opposite Bale is the beloved Matt Damon, who plays the more measured Carroll Shelby – the driving force behind the driver, so to speak.

“It’s an acting tour de force—Matt and Christian have never been better,” asserted director James Mangold in a May interview with Entertainment Weekly.

Tony Award winner Tracy Letts also stars as antagonist Henry Ford II. Reviews of the movie’s early screenings have indicated that Letts, too, gives a magnetic performance. It’s quite something for someone to generate scene-stealer buzz when playing alongside the likes of Bale and Damon!

2. A Refreshing Story Of Friendship

Despite the film being about car racing, its heart will be the relationship between Shelby and Miles.

“It’s these two friends figuring out how do you deal with these a**holes in suits who know nothing about racing,” noted Bale to Entertainment Weekly in the aforementioned piece. “It transcends racing and becomes something that captures the spirit of people who are willing to risk everything for their love.” This, to some, may call the excellent Ron Howard film Rush to mind. Though ostensibly about Formula 1 racing and a legendary rivalry, that film ultimately wound up being surprisingly poignant as a result of its focus on the relationship between the two drivers at its core (Niki Lauda and James Hunt, played by Daniel Bruhl and Chris Hemsworth, respectively). If Ford v Ferrari strikes a similar note, it will be in good shape.

3. Plenty of Car Racing on Screen

While car racing admittedly does take a backseat to the film’s compelling characters, there is still plenty of action, especially during the climax at the historic 24-hour Le Mans ‘66. With a healthy number of racing scenes (most of which revolve around Bale), car and sport aficionados alike are sure to fall in love with the film. For fans of Ferrari, too, it may strike a somewhat nostalgic note.

While Ferrari remains one of the most prominent name in racing, it has struggled of late, losing out to Mercedes and sometimes Red Bull on the wildly popular F1 circuits. This trend is continuing in 2019, when up-to-date online sportsbooks are showing Ferrari all but out of the running in F1 yet again. Now, F1 and Le Mans are not the same thing, but all the same, in an era when racing and auto enthusiasts have grown used to Ferrari dwindling in the race odds and final standings, Ford v Ferrari may just take people back to a sort of golden era for one of the biggest names in racing. The idea of Ferrari as the team to beat is at this point almost mythically significant.

Filmmaker James Mangold has been the creative force behind numerous award-winning movies, including Girl, Interrupted, Walk the Line, and 3:10 to Yuma. The director’s most recent film, Logan, was commended for its poignancy and realistic violence, and arguably introduced a whole new way to craft a superhero film.

His work on Ford v Ferrari is said to be nothing short of spectacular. And more specifically, according to the Los Angeles Times, many critics have deemed the directing style of the movie to be “old school”—something Mangold adores.

“I love that. If I were a carpenter, I’d love it if you said the quality of my tables is old school. It would mean that there are beautiful joints and that things aren’t just tacked together,” explained Mangold to the publication. “I live for that. It’s why I still make movies and have a harder time in television, because what I’m doing requires more time. I love the craft and I love trying to put things together in a way that feels resonant.”