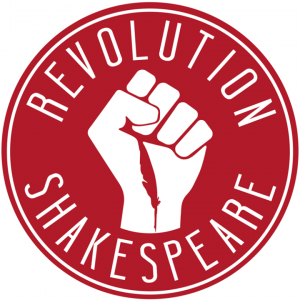 Griffin Stanton-Ameisen has quickly established a reputation as one of the best young actors in Philadelphia. He’s also a huge Shakespeare fan. After a one-of reading of Julius Caesar last year, Griffin and friends are launching the city’s newest Shakespeare company this month with a staged reading of HENRY VI, PART III. Writing for Phindie, he tells us a little about the new company, Revolution Shakespeare, and picks out his favorite Bard plays.

I am fortunate enough to be working on this at Quintessence Theatre Group right now [runs October 9-November 23, 2013, see quintessencetheatre.org], and it is just a really great play. Shakespeare attacks every possible angle of the human struggle with humor and pathos. It is so relatable. And man, it’s violent—violent emotionally and physically, in the best ways.

“Our wills and fates do so contrary run
That our devices still are overthrown.
Our thoughts are ours, their ends none of our own.

A story of alienation and revenge, Othello has long been a favorite of mine. How Othello is spoken about and treated is—sadly—-in a way still familiar in our society. And Iago is one of the most evil characters in Shakespeare . Our “hero”, Othello, is not the audience’s voice into the play, it’s Iago—you even find yourself understanding his journey. This makes for a thrilling and haunting play.

“Men should be what they seem,
Or those that be not, would they might seem none!”

King Lear takes us on a harrowing journey. A powerful, bombastic leader gives his lands to his daughters.  This does not go very well. Those in his life who try to warn or tell the truth are pushed to the side and Lear is forced to endure a heart-wrenching downfall. The play contains so many memorable characters. Revolution is lucky enough to have director Samantha Bellomo on board to direct our last event of this season, an all-female King Lear with Nancy Boykin as Lear and Cheryl Williams as Gloucester. To see what all of the women involved brings to all of these fantastic roles is going to be a treat.

“Love well our father.
To your professèd bosoms I commit him.
But yet, alas, stood I within his grace,
I would prefer him to a better place.”

One of my favorite themes in Shakespeare is the idea of what it really means to be a king.  How the public views a king and how a king feels the weight of the world on his shoulders.  This is beautifully exemplified in Henry V.  The campfire scene in the play is one of my favorite scenes in the canon, and Henry’s speech following is just heart-breaking.  Plus, you have the St. Crispin’s Day speech, which gives me chills just thinking about it.

“Not all these, laid in bed majestical,
Can sleep so soundly as the wretched slave,
Who, with a body filled and vacant mind,
Gets him to rest, crammed with distressful bread”

We read the play at my apartment a couple months ago as it had always intrigued me.  The response was amazing. It’s dark, it’s darkly funny, it’s bloody, it’s epic, and the conflict is so grand, yet so personal.  I have come to realize how many lines of text in the play are favorites. And for a fun, contemporary comparison, it is quite similar to the Game of Thrones novels, which are so popular now. George RR Martin is on record as saying the War of the Roses was a huge influence in writing the novels, and it’s only a small coincidence that in Henry, the battling families are York and Lancaster and in Game of Thrones they are Stark and Lannister. Join Revolution Shakespeare on October 13, 2013, at Hawthorne Park as some of Philly’s finest classical performers bring 3 Henry VI alive in the fall night. An Elizabethan-themed menu of food will be available from the Cherry Bomb Bus food truck and warm beverages will be served to suit the atmosphere.

Who escapes the lurking serpent’s mortal sting?
Not he that sets his foot upon her back.
The smallest worm will turn being trodden on,