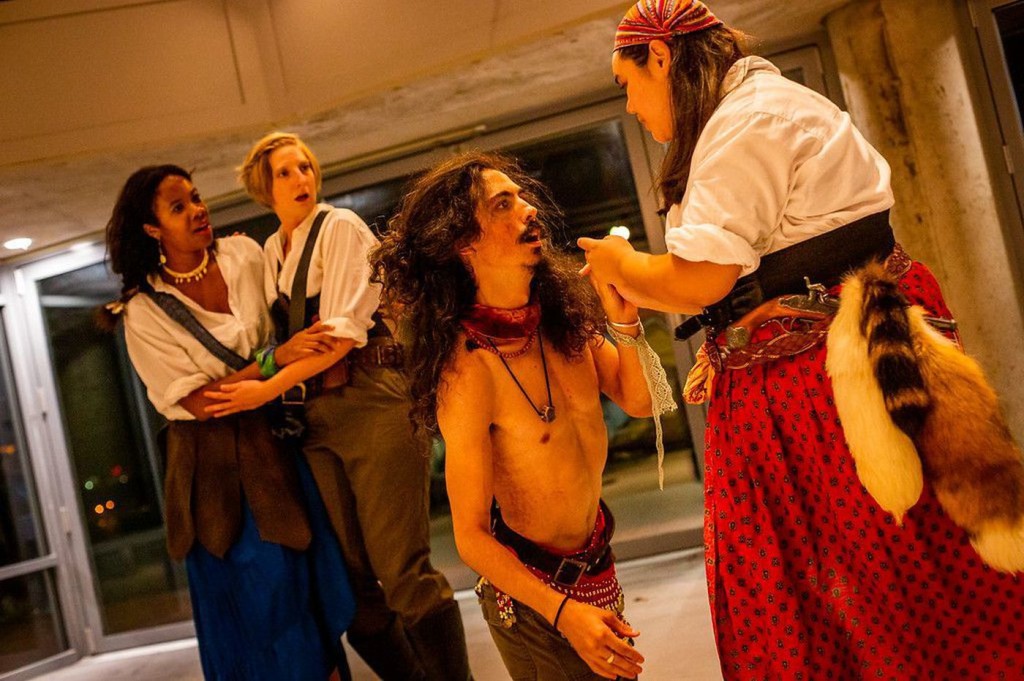 What do you get when a raging storm at sea throws together Amazon-like women, pillagers, and privateers, a crusty castaway, lust, treasure and live music? Under the direction of Dan Hodge you get one rollicking romp of a play replete with rapier wit, scintillating swordfights, swooning wild women and other sundry surprises! Written by John Fletcher and Philip Massinger circa 1622 with a nod to Shakespeare’s The Tempest, this late era Jacobean comedy is set on a no-name island where adventure, reunion, and love intertwine to create a scrappy maritime tale of marauding and romance.

On a bare-bones set beneath the Rotunda roof within the Independence Seaport Museum, with a view of the Delaware River, Linnea Bond as Crocale, Andrew Criss as Tibalt, Cameron DelGrosso as Albert, Nathan Foley as Sebastian, Joel Guerrero as Franville, Stephanie Hodge as Aminta, Eli Lynn as Raimondo, Eric Mills as LaMure, Kimie Muroya as Clarinda, Yajaira Paredes as Rosellia, and Natajia Sconiers as Juletta, bring the show to vivid life through their art and ever present physicality. Innuendo and action on the part of the ensemble achieves meaning that words alone cannot. Particularly exciting is the sword fight towards the end of the show choreographed by fight director Eli Lynn which features clustered fighting and more than swords.

Christopher Waters’s rhythms roll with the action, modulate moods and beat out exact moments throughout the play much like a movie soundtrack, only it’s live music and actually felt throughout the venue.

Yo-ho-ho – snacks and assorted beverages are available as well as a fun action packed production by the water.