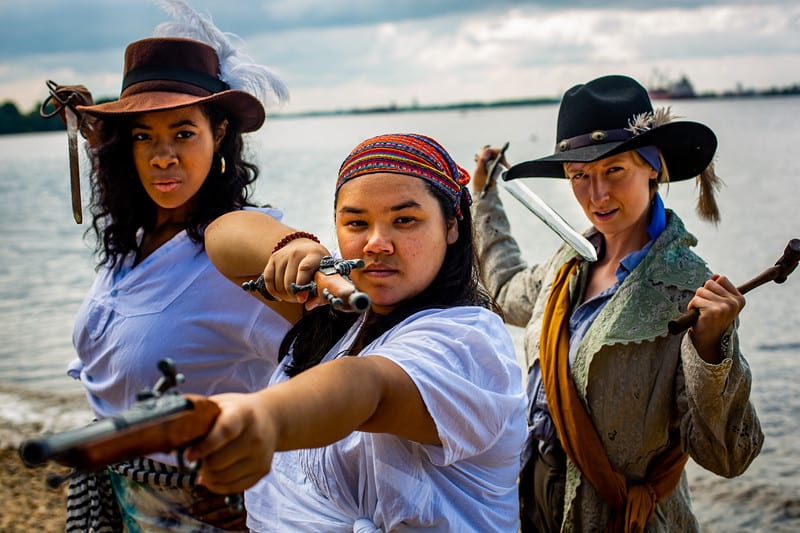 “My first career ambition was to be a pirate,” says Dan Hodge, director of Philadelphia Artists’ Collective‘s Fringe Festival production of 17th-century play The Sea Voyage. “Finding a play that has all of the high seas swashbuckling, and folds in a band of warrior women is a serious win.”

Often thought of us an imitation or response to Shakespeare’s The Tempest, this comedy of the late Jacobean period was licensed for performance in 1622 and officially entered into the folio of John Fletcher and Philip Massinger in 1647. These two playwrights succeeded Shakespeare as the chief writers for The King’s Men, a much admired acting troupe. Like Shakespeare, they were less concerned about the confines of geography and time thus creating plays stretching just how far a character could travel and what they could achieve in a small amount of time. Sharp and witty, the play looks at colonialism and the politics of the sexes in a wild and rambunctious way.

“It has all of the high comedy potential one finds in the great cartoons, but balances it all against genuine heart and romance,” says Hodge. “It’s an adventure story in the truest sense, and exactly the kind of fun romp that fits in the Fringe. Six-year-old Dan is terribly excited.”

PAC have provided some of the finest works of recent Fringe Festivals, with The Creditors (2012), The Sea Plays (2013), The Rape of Lucrece (2014), Iphigenia In Aulis (2017), and Mary Rose (2018). The company returns to the Delaware waterfront (site of The Sea Plays and Iphigenia for another site-specific nautical tale which launches PAC’s 2019-2020 season with with a cast of eleven actors.