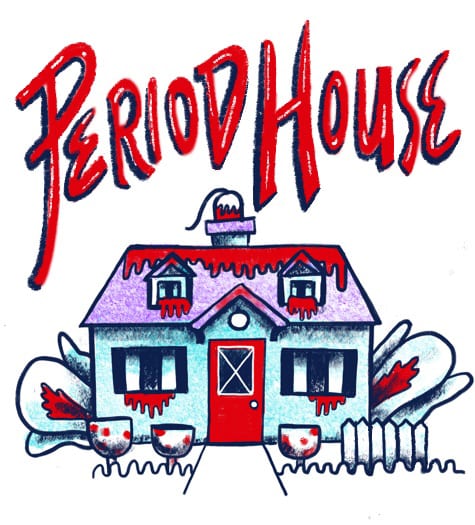 “Menstruation is a reality and a common denominator for over half of the human population for a majority of their lives,” says Liz Zimmerman, originator and producer of 2019 Fringe Festival show Period House. “Many of us struggle and truly suffer from it, yet modern society still sends messages that we are making it up and demands silence on the topic.”

Period House portrays luxury hotel-spa exclusively for ladies at that time of the month! In about an hour, this dramatic comedy deals with heavy issues such as motherhood, marital struggles and PMDD, but with a healthy luster of comedy and snappy dialogue.

Period House was conceived in January 2019 at playwright Kent Dwyer’s birthday party at Oscar’s Tavern. When Liz mentioned that she wished there was a luxury hotel she could check into for the duration of her period, Kent quickly replied: “Can I work there?” Because neither have the resources to make the dream come true, they decided to spend a lot of time there in their imaginations and invite Philly Fringe audiences to join them.

“I need this play,” says Zimmerman “and I believe the world needs this play right now. It’s designed to make us think about changing our attitudes while we laugh. I hope that everyone who sees Period House walks away kinder to themselves and to all women.”

Period House subverts the practice of banishing women to menstruation houses (which occurs in traditional cultures from ancient Israel to modern India) and reimagines it as an enviable experience of extra comfort and care. It’s meant to be cathartic for people with period and give ladies a chance to laugh out loud and in public at what otherwise makes them cry silently and privately every month.

The work is produced by new local company Ragtime Players, a diverse crew including actors who identify as Egyptian American, African American, South Asian, and lesbian. They are supported by a bisexual, Cuban-Jewish, New York East Village native stage manager; a gay male playwright who was raised and still resides in Northeast Philly; a queer Asian web manager and a producer in a divorce band. Ragtime Players is one of only five productions selected for the FringeArts Independent Artists’ Festifund grant this year.